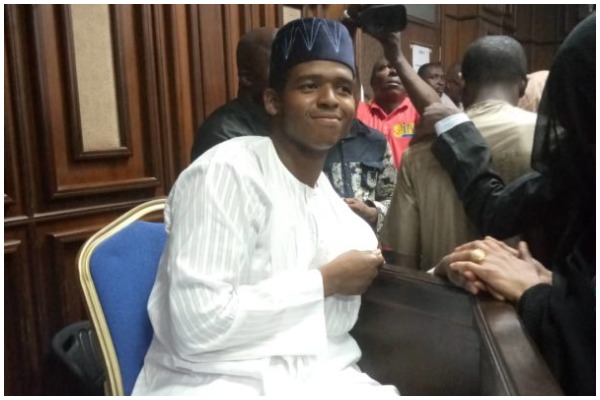 Federal High Court in Abuja has on Tuesday revoked the bail granted Faisal Maina, the son of Abdulrasheed Maina, and ordered his arrest for jumping bail in his trial on money laundering charges.

Justice Okon Abang also ordered that his trial on money laundering charges would proceed in absentia pending when the security agencies would be able to arrest and produce him in court.

The judge summoned his surety, a member of the House of Representatives, Sani Umar Dangaladima, representing the Kaura-Namoda Federal Constituency of Zamfara State, to appear in court to show cause why he should not forfeit the N60m bail bond which he signed for Faisal.

The order for Faisal’s arrest came barely six days after the same court, on November 18, issued a similar order against his father, Abdulrasheed Maina, a former Chairman of the defunct Pension Reformed Task Team, who is facing separate N2.1bn money laundering charges before the court.

On Monday, Justice Okon Abang, sent Maina’s surety, Senator Ali Ndume, to jail for his inability to produce the fleeing defendant in court.

Earlier on Tuesday, following the judge’s November 18 ruling, Maina’s trial held in his absence with three prosecution witnesses testifying behind him and his legal team.

At the resumed hearing of Faisal’s trial on Tuesday, the Economic and Financial Crimes Commission’s prosecution counsel, Mohammed Abubakar, said both the defendant and his surety had not attended court since June 24, 2020.

Neither Faisal, his surety, nor his lawyer was present at the Tuesday’s proceedings.

Abubakar, therefore, applied the revocation of his bail and his arrest citing section 184 of the Administraton of Criminal Justice Act.

The prosecution also applied for the court to order his trial in absentia as provided by 352(4) of ACJA.

My third application is for the issuance of summons on the surety, and for him to show cause why he should not forfeit the bail bond.

The judge granted the prayers and adjourned till Wednesday.