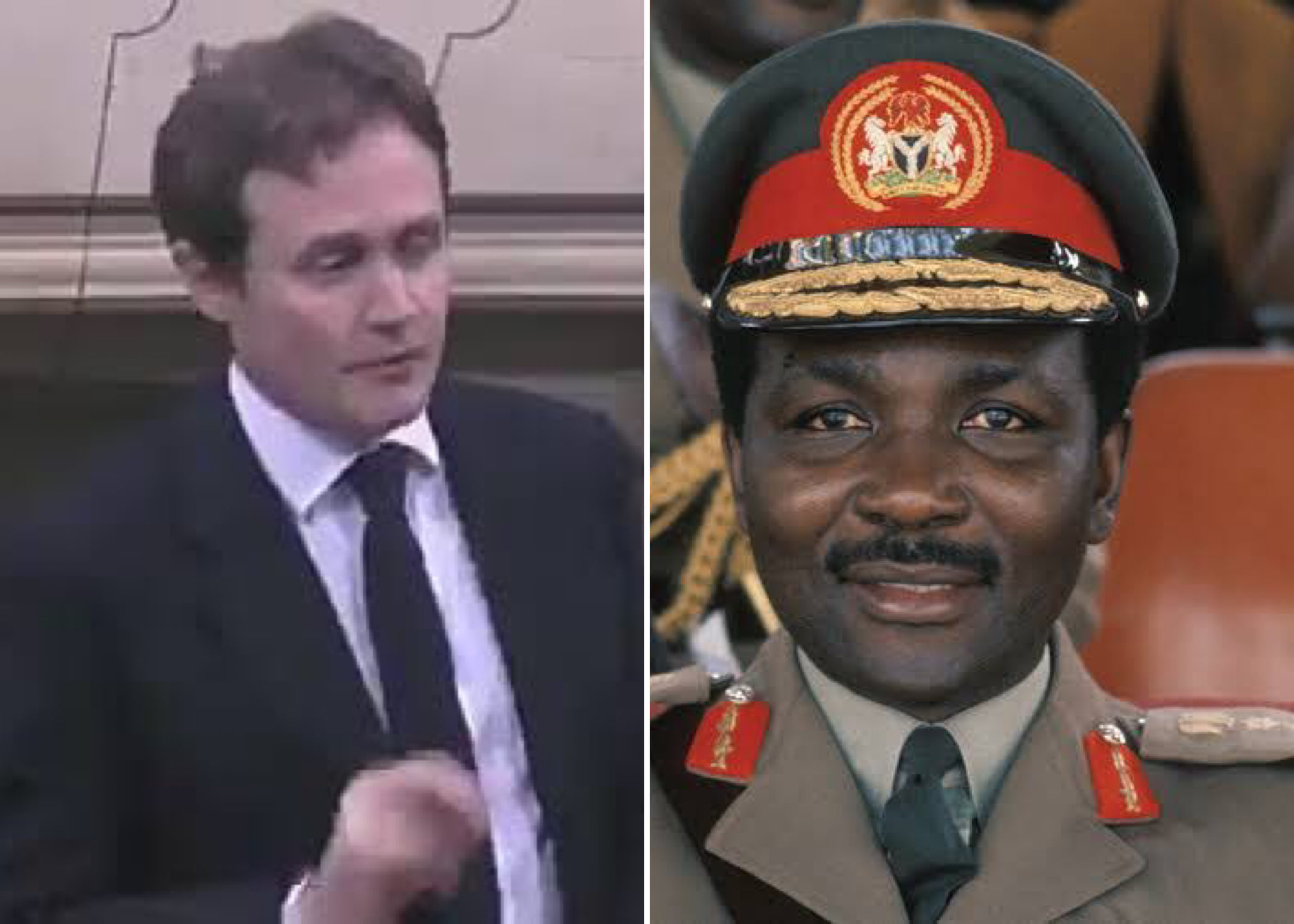 United Kingdom parliament has on Monday November 23, debated a petition seeking to impose sanctions on Nigerian Government officials involved in the shooting of peaceful #EndSARS protesters at Lekki tollgate on October 20.

The debate stemmed from a petition started by Silas Ojo which garnered more than 220,000 signatories, crossing the 100,000 mark needed for a petition to be debated by the lawmakers.

One of the highlights of the debate was moment a member of the parliament urged his government to place sanctions on Nigerians who flee to UK with ill-gotten wealth.

Yakubu Gowon known as Jack who served as the head of state of Nigeria from 1966 to 1975. He ruled during the deadly Nigerian Civil War, which resulted in the death of 3 million people, most of which were civilians.

He took power after the 1966 Nigerian counter-coup and was overthrown in the 1975 coup d’état.

What we are seeing in Nigeria today is part of that story. It is a tragedy we are all witnessing because we see things falling apart.

The problem this time is not foreign pressure known as colonialism. The pressure instead is corruption and violence and attempts at control (of power).

We need to call out the corruption, we need to use the powers that we have in this country to stop those who are profiting from the wealth of that great nation and hiding it here.

Now some people will remember when general Gowon left Nigeria, he took half of the Central Bank, so it is said, and moved to London.

We know today, even now in this great city of ours, there are sadly some people who have taken the wealth of Nigerian people and hidden their ill-gotten gains here.

We know that our banks sadly have been used for that profit or that illegal transfer of asset and that means that the UK is in a unique position in being able to actually do something to really exert pressure on those who have robbed Nigerians.

A UK Parliament member just revealed that General Gowon, during his time, carted away with HALF OF CBN!!

If you come across this on your timeline please RETWEET! Some of us still don’t know this. #EndSARS pic.twitter.com/MelbIjOTZm

The lawmaker’s comment about Gowon’s alleged looting has sparked reaction from many Nigerians. They expressed disbelieve and disappointment at the news as they stated that Gowon is often praised as an hero who fought for Nigeria’s democracy.

Will Yakubu Gowon sue that UK Parliamentarian for falsely accusing him of stealing half of CBN? Or he is waiting for Adamu Garba to do it for him..The painful part for this matter be say them make us dey see Gen. Gowon as a hero chia.. These people dey run us local from day one

The National Anthem needs to be edited, because we don’t have national hero’s. Abacha, Gowon and others were thieves!!!

I am not a fan of Gen. Gowon. I think rather than use his influence & privilege to speak truth to power, he often rather chose to cozy up to every government of the day. But to say he stole half the CBN considering how he left office? That’s irrational. People gotta be reasonable

The actual heroes like saro wiwa, were labeled rebels.

Nigeria will be great again 😭

Same Yakubu Gowon waited for his Igbo girlfriend, Edith Ike, to abscond to Germany before invading Biafra. Immediately he confirmed Edith was in Deutschland, he gave marching order for Nigerian troops to invade.
Whatever they said that man did, he fucking did it. Bloody scum.

In denial with this Gowon issue

Yes he was Head of state when Nigeria was at its most prosperous time ever! Most of his aides got quick wealth but Gowon has lived a frugal life

Such wealth does not hide

Anyway can’t vouch for any Nigerian Politician. That’s how Bubu scammed us

Imagine stealing half of cbn’s worth when there was just 10naira and 20naira note. No cash transfer, it just had to be cash. Now i see why our present government call them heroes.. Gowon and his team are legends pic.twitter.com/6Fq8B9YiKh

If not for the Uk parliament we wouldn’t have known Gowon was a devil and Idol to Hushpuppi, someone they almost portrayed as an Idol for us while we were in primary and secondary school. It’s a shame we were fed a lot of lies about this same person who executed 3m igbos.😭

How can one country have Abacha, Buhari, Gowon, Obasanjo among the founding fathers? This wan na aLOOTER continua pic.twitter.com/wrz7MPMxCF

A govt official in UK Parliament just stated today in their session that they all know that Yakubu Gowon stole half the central bank of Nigeria and took it to London.

These are the clowns we were taught in schools to see as “heroes”.

I am not surprised at that revelation by a member of the UK Parliament on General Gowon though. No Nigerian former head of state is innocent. They all took Nigeria’s money to the UK and the present ones are still doing it. Even the UK government is aware.

Gowon that we was taught to be a national hero ???🤦🏻‍♀️ history lied to us. He never was.

Gowon’s cup has finally runneth over:

– Biafra genocide.
– Looting up to half of CBN kingdom.

Thanks to the UK parliament who revealed to us that this man stole our yams and today he is claiming to be holy. His name is Yakubu Gowon pic.twitter.com/Pjna3sDfVn

Las las “The Labour of our heroes past” na scam. No hero, no labour. Just thieves like Gowon, Babangida and Abacha.

Member of the UK Parliament urge the UK Govt to not only place serious sanctions on every individual that is involved in the #LekkiMassacre but to also help Nigerian people by exposing stolen national wealth hidden in UK banks by Nigerian politicians.#EndSARS
Gowon
Half of CBN