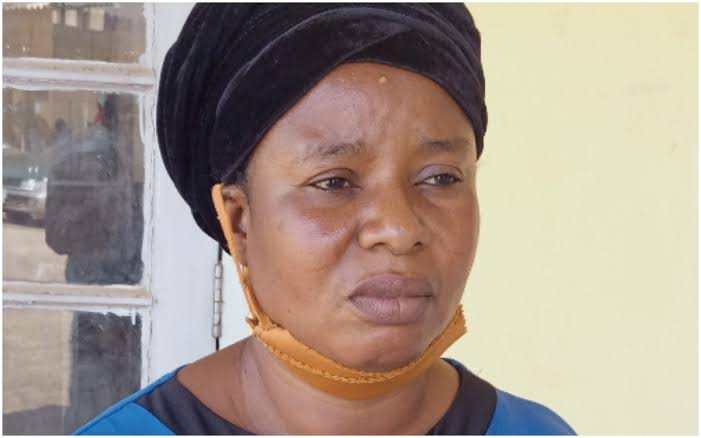 A mother, Mrs. Funmilayo Akinade has shared the sad story of how her son, Seyi, killed himself after losing N7 million in foreign exchange (FOREX) trading, following his arrest and illegal detention by SARS operatives in Ogun state.

Mrs. Akinade narrated the incident on Thursday, November 12, while speaking before Ogun state judicial panel of inquiry and restitution set up to review cases of brutality by SARS operatives.

Funmilayo and her husband, Segun, had filed a petition before the Ogun State Judicial Panel of Investigation, demanding justice for their deceased son.

Appearing before the panel, the woman, who is a resident of Ifelodun area of Ipaja Ayobo in Lagos State, said Seyi was a student of the Federal University of Agriculture in Abeokuta, Ogun state (FUNAAB).

She revealed that on February 2, 2020, some of the members of the now-disbanded SARS, invaded his son’s hostel in the Camp area of Obantoko, Abeokuta, arresting him alongside 16 others.

She told the panel that her son, friends and other neighbours were taken to the police station in Obada Oko, where they were all detained overnight.

The woman said Seyi was released the following day after paying for bail, stressing that during his detention, as a forex trader, he was losing his investment.

He also couldn’t also partake in his final year project defence in the University, making him depressed and devastated.

My son was a forex trader, while he was in police custody, he demanded his phone so as to continue with his online trading because he had people who had investments with him. But they asked him to bring N2million; later it was reduced to N200,000. He refused to give them bribe because he was not a Yahoo-boy. He also had a final year project to defend the other day. Because he refused to give them money, they didn’t release him and his friend, Adejoro Damilare.

By the time they were released the following day, he had lost about 20,000 dollars in his forex trading and he also lost his project defence at the university.

According to the distraught mother, her son returned to Lagos State when the COVID-19 lockdown was about to start in March and told her how his forex trading investors had been demanding for their money, thinking he was a fraudster.

On April 21, Funmilayo explained that he got a call from a friend of Seyi known as Moses, who told her his son had been rushed to the hospital.

Amid tears, she expressed;

My son drank Sniper to kill himself. He died as a result of the losses he incurred during his illegal arrest and detention. He was depressed and couldn’t cope with the enormous debts hanging on his neck.

He has posted the suicide note on Twitter a few days before he took his life. But I didn’t know. I am not on Twitter. Maybe I could have stopped him.

Recounting his experience, a witness and friend of the deceased, Damilare Adejoro, who was also among those arrested by SARS operatives, expressed;

On February 3, 2020, Inspector Babajide Adebusuyi and his three other colleagues raided and arrested all the 17 students staying inside Chocolate City Hostel at Camp, Abeokuta, detained and locked us all night inside the cell at the Station.

The officers did not tell us what our offence was but rather when we got to the station, we were locked up with other 52 inmates already in a small cell after we were asked to pay a sum of two million naira for bail which we could not afford to pay.

Adejoro added that while in the police custody, his late friend who was a forex trader severally told the officers that he had opened a trading business online that would run into loss if not attended to.

He stated that they refused him access to his mobile phone, slapped and even made a jest of him which eventually made him lost over N7million.

Adejoro added that before his friend committed suicide on April 22, he went on his Twitter page and wrote severally, “this is my story in case anyone is wondering why I did it” .

He told the panel that on Seyi‘s last day on earth, he wrote;

I guess it’s goodbye now, no one heard my cry for justice and this had to happen haha. Bye world.

Adejoro appealed to the panel to ensure that justice is done in the matter and also requested that the parents of his deceased friend be compensated for the huge loss that led to the death of Seyi Akinade.

Another witness, Olaleye Adejare, who was the landlord of the deceased, confirmed the incident saying the police officers eventually collected N120,000 before releasing the students without any just cause.

Reacting to their testimonies, the respondents, Inspector Babajide Adebusuyi said they arrested the victim, but;

It was because they got information that some people were smoking Indian hemp in the house even though the deceased, as well as his friend, were not culpable.

Lady Narrates How Dad Killed Himself After Discovering All…