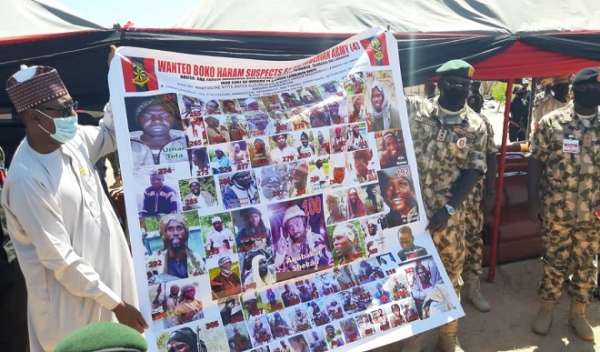 Nigerian Army has on Wednesday released a list of 86 people wanted in connection with the act of terrorism, all alleged to be members of the notorious Boko Haram sect.

The latest release is the fourth to be issued by the military authorities, who have in the past been rolling out lists of wanted terrorists.

Prominent on the list is the leader of the Boko Haram sect, Abubakar Shekau, who has been declared dead a few occasions in the past.

The latest list was launched by the Chief of Army Staff, Lt. Gen. Tukur Buratai alongside Borno State Governor, Babagana Zulum at the Nigerian Army Super Camp, Chabbal in Konduga Local Government Area of the state.

The ceremony also witnessed the launching of Civilian JTF, Hunters and Vigilantes into the operations of the Nigerian Army Super Camp.

Buratai said the two events were part of activities designed for the final push to end Boko Haram activities in the North-East region.

The induction of Civilian JTF into the operation will greatly help in containing the activities of Boko Haram because of their knowledge of the terrain and identifying Boko Haram members.

The COAS maintained that “there is no Child CJTF that will participate in the operation” and called on the public to support the military in fishing out remnants of the insurgents.

Zulum renewed his call on Boko Haram insurgents who hiding in Sambisa forest and bushes in the fringes of Lake Chad to lay down their arms and surrender.

For those that are still in the bush, terrorising innocent lives and destroying properties, I call upon all of them to surrender.

You are killing your brothers and sisters, destroying your own infrastructures that were built using money generated through tax from your forefathers. Today, we have all seen the level of devastation, nobody is been left, we are all affected in one way or another.

Theatre Commander, Operation ‘Lafiya Dole’, Major General Farouq Yahaya, said adequate arrangements have been made for the welfare of Civilian JTF that would participate in the operation.

You Can’t Do Better Than Your Predecessors, Boko Haram…