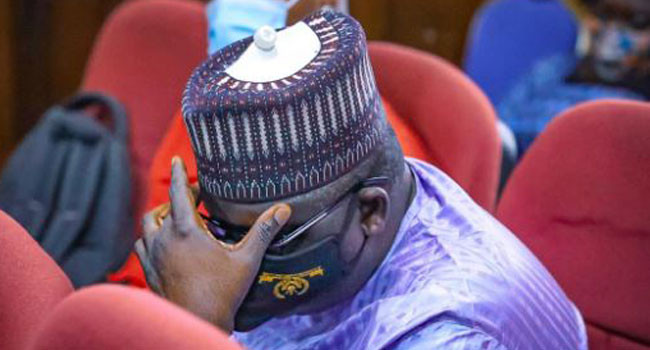 Federal High Court in Abuja has ordered the remand of Abdulrasheed Maina, former chairman of the Pension Reform Task Team (PRTT), at Kuje correctional centre until the end of his trial.

Maina, who is being trial for alleged money laundering to the tune of N2 billion, along with his company, Common Input Ltd, was found by the court to have jumped bail when he suddenly stopped attending trial for over a month now.

The court subsequently revoked the bail granted him, issued a bench warrant for his arrest and ordered his surety, Senator Mohammed Ali Ndume to forfeit the N500million bail bond he pledged.

Ndume was then imprisoned by the court for his inability to produce him in court but later granted bail after spending five days in detention.

Subsequently, Maina was arrested in Niger Republic on Monday where he had taken refuge, and was extradited to Nigeria on Thursday.

Maina was then brought before the court this morning by a combined team of policemen and operatives of the Economic and Financial Crimes Commission (EFCC).

At the resumed hearing of his case in court on Friday December 4, Maina’s new lawyer, Adaji Abel, asked for a short adjournment to enable him to study the facts of the case.

The judge, Justice Okon Abang granted the application on grounds that the defendant who is presumed innocent is entitled to legal representation.

He subsequently adjourned the case to December 8, 2020 for a continuation of trial and ordered Maina’s remand saying;

The defendant is already on bench warrant, his bail having been revoked. So, he shall be remanded in correctional service pending completion of trial.