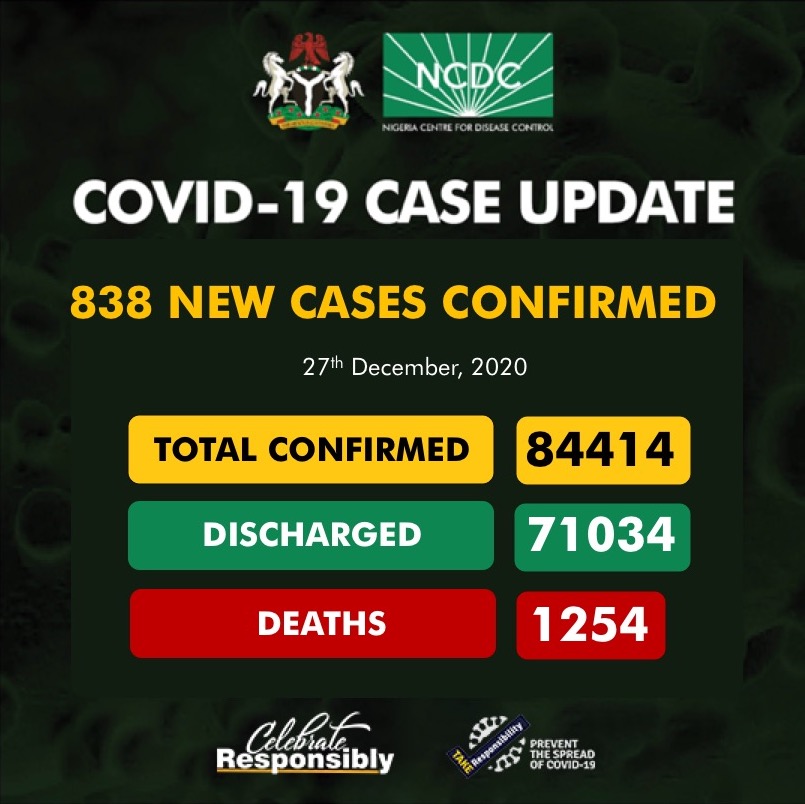 The health agency made the announcement via its Twitter page with the new cases recorded in 15 states and Federal Capital Territory (FCT).

A total of 1,254 deaths have now been recorded thus far in Africa’s most populous country as 7 new deaths was reported in the last 24 hours.

A breakdown of cases by state can be found via https://t.co/WbhsloZW9z.ngq pic.twitter.com/yqprG9IN1Z

Since the detection of coronavirus in Nigeria, 912,144 samples have been tested.

In other news, South Africa’s total coronavirus infections since the first case in March crossed a million on Sunday, its Health Ministry said.

This comes just days after a new faster spreading variant was confirmed to be present in the country.

The grim milestone comes nine days after the country, the worst hit in Africa, reported 900,000 cases. The country had taken two weeks to reach 900,000 from the 800,000 seen early in December.

Several hospitals and medical centres have reported wards overflowing with patients with many healthcare workers cancelling their vacations to tackle a huge influx of patients.

The new variant, referred to as 501.V2, was discovered by a network of scientists around South Africa who have been tracking the genetics of the virus.
It appears to be focused in the south and southeast of the country and has been dominating findings from samples collected since October, they say.
Since the new variant was announced, several countries cancelled flights to the country, pounding the already bruised travel and tourism sector.
ncdcNew coronavirus casesnew recoveries
0
Share FacebookTwitterGoogle+ReddItWhatsAppPinterestEmail