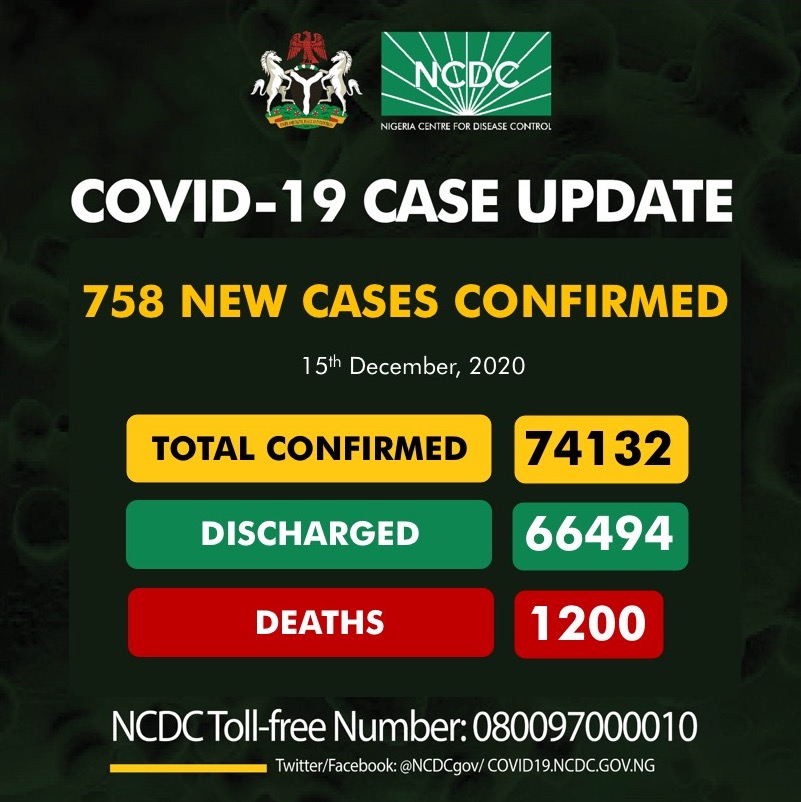 Nigeria Centre for Disease Control (NCDC) has announced 758 new cases of the coronavirus infection, 180 recoveries and 3 deaths in the country.

The announcement was made via the agency’s official twitter handle on Monday night, September 28 with the breakdown of cases as follows;

Our discharges today include 29 community recoveries in Lagos State managed in line with guidelines.

Our confirmed cases today includes data reported from the FCT over 2 days.

A breakdown of cases by state can be found via https://t.co/zQrpNeOfet pic.twitter.com/yL1UJt1Mb8

A total of 1,200 deaths have now been recorded thus far in Africa’s most populous country as 3 new fatalities were reported in the last 24 hours.

Meanwhile, World Health Organisation has Tuesday said it is in discussions with Pfizer and Moderna about possibly including their high-tech coronavirus vaccines among early jabs for poor countries at affordable prices.

WHO-backed Covax facility, created to ensure equitable access to COVID-19 vaccines around the world as they become available, is aiming to provide some two billion doses by the end of next year.

It has already secured hundreds of millions of doses of vaccine candidates being developed by AstraZeneca, Novavax and Sanofi-GSK.

US pharmaceutical giant Pfizer has, along with German BioNTech, created the first coronavirus jab to receive regulatory approval in a number of Western countries. Vaccination campaigns have already begun in Britain and the United States.

The Moderna vaccine is expected to quickly receive approvals as well, which has proven to be 94.5% effective against the virus.

WHO In Talks With Pfizer, Moderna On COVID-19 Vaccine Access For Poor Countries