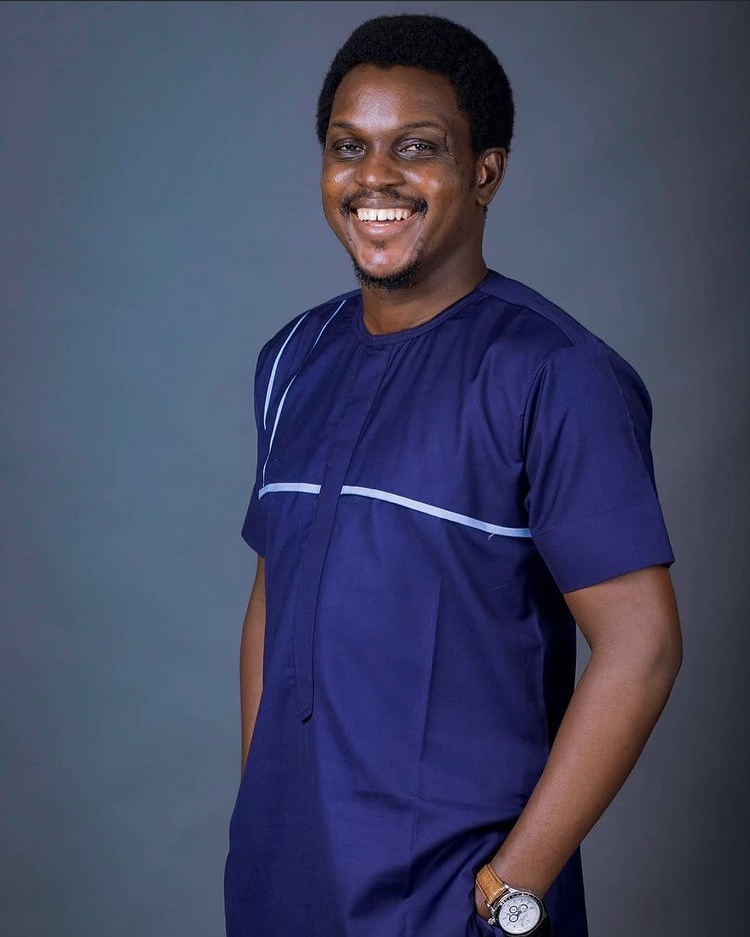 Pastor Timi Adigun, presiding pastor of The Ark Church, Lagos, and founder of MINE Teenage Ministry has been accused of having sexual relationship with the same teenage girls and ladies whom he is supposed to counsel against sexual immorality.

The ministry which has the mission of raising teenagers to focus on sexual purity hosts events like Sexual Purity and World Purity Day to encourage no sex before marriage.

However, on Thursday, a career development and gender equality advocate, Orifunke Lawal in a series of tweets alleged that the pastor had been abusing some of the teenage members of his ministry “for years”.

According to her, the pastor and his wife had suddenly shut down their church, The Ark, and cancelled all pending events when news of the alleged abuse broke.

She alleged that former members of the church and former pastors confirmed that the pastor has, at some point, abused some of his members in the church.

The Twitter user also reminded her followers how Pastor Timi had defended Pastor Fatoyinbo in 2019 when he was accused of rape.

When Biodun Fatoyinbo’s case went viral, Timi Adigun of Mine Teenage Ministry told his church members not to be talebearers or speak against a man of God.

Little did anyone know that he himself had been sexually abusing and harassing his female teenage members for years!

Timi Adigun runs a teenage ministry whose MAJOR core value is sexual purity. They run a yearly VIRGINITY day. If anyone should be caught in such a scandal, it should NOT be Timi Adigun. Not him.

Yes, maybe it is untrue but he and his wife suddenly shut down their church, The Ark, when news broke out. It may not be true but they cancelled all events till further notice.

It may not be true but comments are restricted on IG and people are getting blocked for asking questions.

May not be true but members are getting encouraged not to be “talebearers”.

If you know anyone who was actively a member of the teenage ministry (whether teenagers or adults), please check in with them. I have spoken with a number of them in the last two months and those people are extremely hurt and broken. Too hurt.

The interesting thing is the members are only asking him to come out and address it. They want him to admit it, justice to be followed after and healing gotten for victims. That’s what they are asking.

But he has refused to say NADA. He is even running giveaways on IG.

Oh, and his wife. The loving, meek, motherly Aunty Titi. His wife is also COMPLICIT. Knows about everything.

But well, they’re talking about love on IG.

Jesus, you need to come back ASAP.

Ask any MINE Ministry member and they would affirm it. Including their ex-pastors. There was a form created by @theakanimoh and a team of investigative journalists to get victims to speak too. Go through that link I posted in my last thread and see former members affirming.

An acquaintance of the church and public relations expert, Akan Imoh, also took to his Facebook page to write an open letter to the pastor, demanding for accountability and justice.

Imoh publicly accusing him of violating the trust of parents who left their teenage children to his care to tutor.

I came back to Lagos some months back to find out that Ojodu Berger, my area was awash with rumours that one of the biggest teens ministry had scattered due to allegations of sexual harassment.

This is a church that started in this area, and has grown to become the biggest teens movement in the country. Pastor Timi Adigun, who founded MINE teens ministry was being accused of having abused not one, not two, but several girls in his ministry. This is a ministry that is built on the idea of sexual purity.

In fact their biggest programme is tagged ‘Virginity Day’ where they have marches all around the country and even abroad to promote sexual purity. I was shocked. In fact, I felt cold. This is because I so much respect Timi Adigun and his ministry. I have been a teen leader/counsellor in this area for close to 15 years, and so, I feel deeply connected to this issue.

I have taken teenagers to this ministry and confidently told them that joining the place would be best for them. I have invited him to my local church before to minister, and even pushed that he be invited to our national camp. So, nobody can tell me that this isn’t my concern.

So, when I started hearing the rumours, I took steps to investigate. I had meetings with some of the top leaders in the ministry. I joined hands with two other journalists and we investigated the matter. We spoke with everyone who mattered, even up to the former pastors. Everyone confirmed the story. They were even urging us to go ahead and publish.

We even created a Google form for former members to register their displeasure. You need to see the anger on that form. The very annoying thing is that this man doesn’t seem like he cares. He just wants to move on. The last I heard is that he has started another church/ministry. Something called ‘Haven of Love’. Actually, MINE Teens Ministry was closed without any proper explanation. The church was also closed too.

You just throw teenagers into confusion. There’s too much anger on the streets. These guys have been hitting up my DM, and I wasn’t even a leader or a member of the ministry. They are confused and angry. Can you imagine, you’ve been telling these kids not to have sex till they get married, but then, you’ve been doing stuff with them in secret.

Do you know how they would feel? Do you know how many of them are going all around looking for revenge sex? Some of these teens can’t even tell their parents what went wrong. If parents hear, that’s the end for some of them. They will never be allowed to go out again. For some, it’s back to their boring parents’ churches where the messages are not targeted at teenagers.

If you’ve worked with teens before, you’ll know how frail they are. That is a very tender age for them. They want to be led right. Right now, they are just wandering the streets looking for what next to do. This was a ministry they called home. Right now, the flock is scattered. It is things like these that make outsiders mock us as Christians, mock our pastors and our faith. These issues need not be swept under the rug.

What we are asking for is simple. We want Timi Adigun to come out and give an explanation. He can’t keep silent. All we want is for him to explain to us. Are these things true or not? Why was the church closed down? If these things are true. These are what we want:
— An admission of guilt
— Public steps to change
— Therapy/Counselling for the girls involved
— Handover of the church leadership.

Meanwhile, comments have been restricted on his Instagram page and people are getting blocked for asking questions but is instead doing giveaways on his page. Also, members are getting encouraged not to be “talebearers”.

There are allegations that his wife, Titilope who is fondly refer to as Aunty Titi is aware of her husband’s alleged atrocities and is therefore complicit. 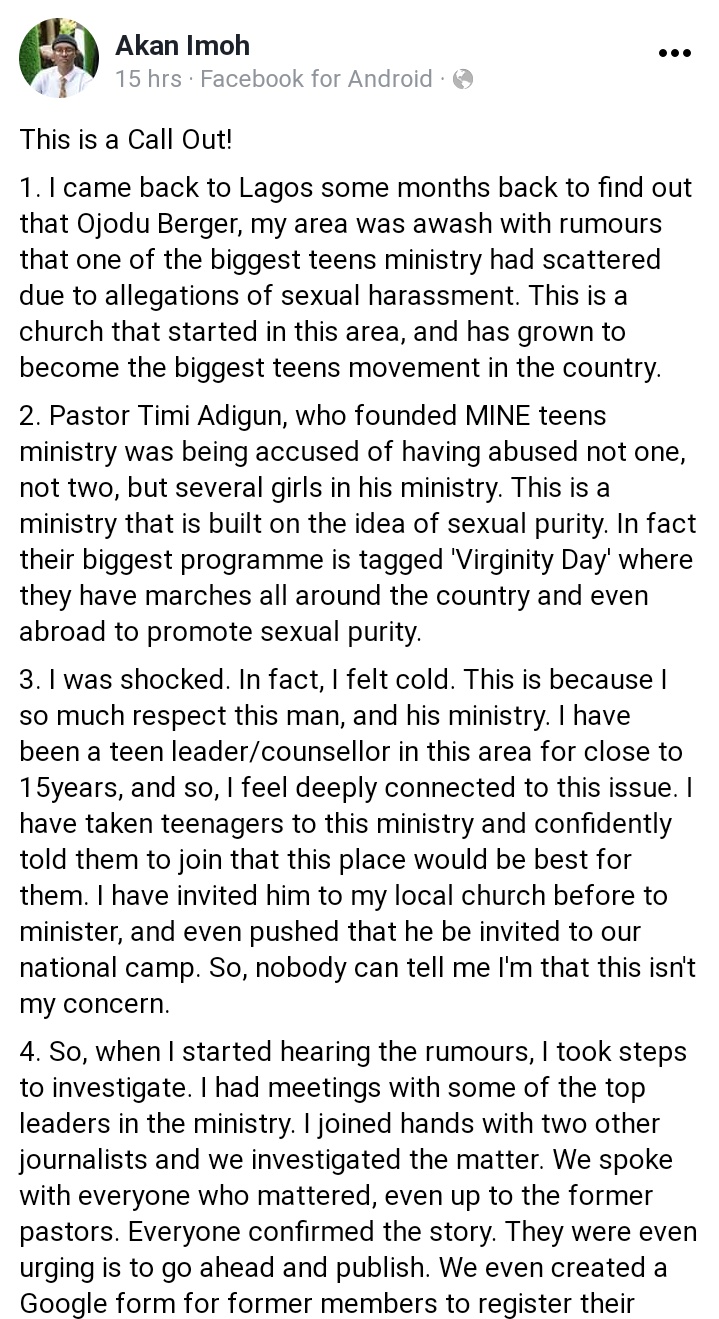 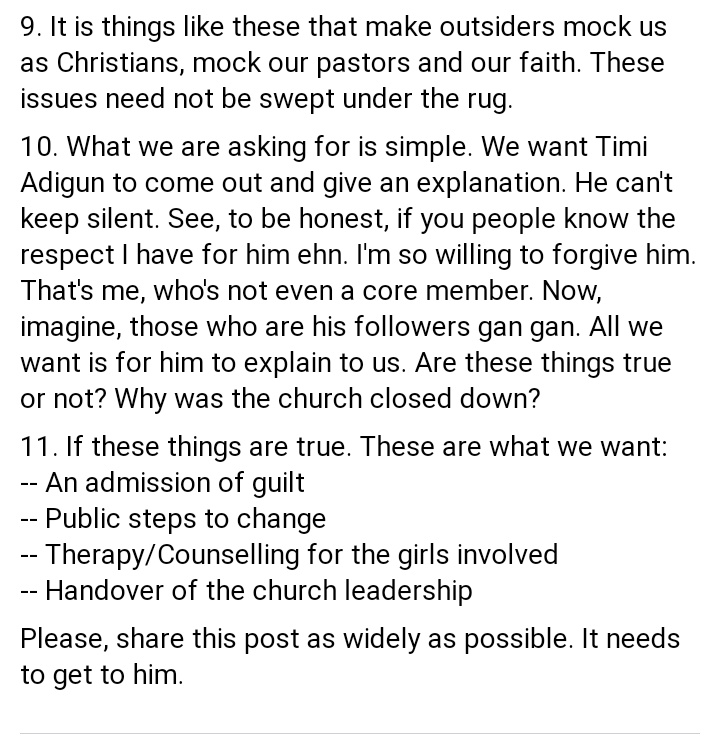 Police Arrest Kidnappers Of American Citizen Rescued By US Forces