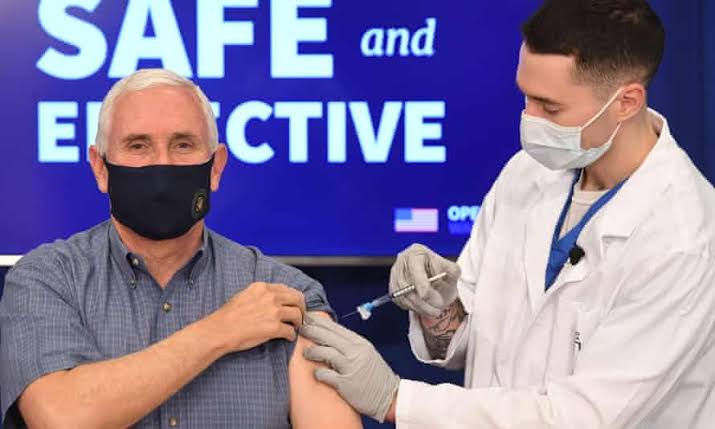 Building confidence in the vaccine is what brings us here this morning. I didn’t feel a thing.

The VP’s wife, Karen and the lead public health official in the country, Surgeon General Jerome Adams, were also given the Pfizer-BioNTech vaccine.

Pence called it a “historic week,” referring to the vaccine rollout, adding that himself he and his wife were;

More than happy to step forward before this week was out to take this safe and effective vaccination that we have secured and produced for the American people.

Doctors advised all three people to return in 21 days for second dose of the vaccine and that they may feel some soreness around the injection site.

Pence received the vaccine just days after the first shipments were delivered to health care facilities across the country and given to frontline workers and nursing home residents.

Signalling the importance given to the event, top infectious diseases Anthony Fauci and Centers for Disease Control and Prevention Director, Robert Redfield, were also in the room.

The notable absence was Donald Trump himself, who has continued to send mixed messages about the seriousness of COVID-19 throughout the crisis, even as US death toll topped 300,000 this month.

However, he has been keen to take credit for the historic speed of vaccine circulation as earlier today, he tweeted that a second drug made by Moderna had been “overwhelmingly approved” and that “distribution to start immediately”.

Trump himself has made it clear he is not planning to take the vaccine imminently, citing the belief that his recovery from a brief but severe bout of COVID-19 has given him immunity.

However, winner of the November US presidential election, Joe Biden, is set to take the vaccine in public soon.

Large numbers of Americans subscribe to the anti-vaccination movement and hostility towards the COVID-19 vaccines in particular has heightened since their approval for general use.

The FDA is expected to follow that recommendation and quickly approve the vaccine. It comes on the heels of approval last week for Pfizer’s vaccine.

The disease caused by the virus has killed more than 300,000 people and infected more than 16.3 million in the U.S. alone, according to data from Johns Hopkins University.

‘We Ate Only Once In Two Days’: Kankara Schoolboys Narrate Horrific Ordeal (video)