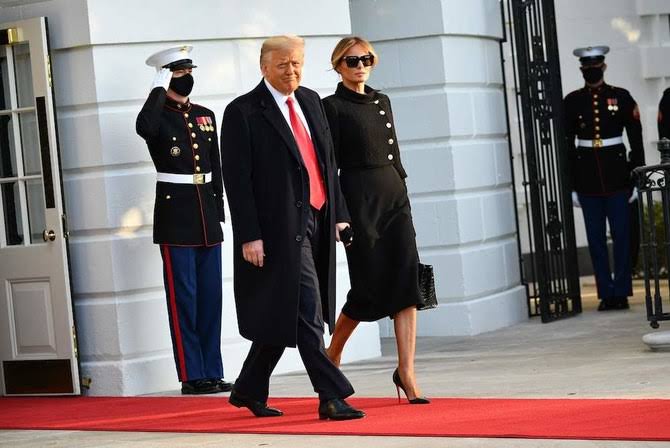 Donald Trump has left the White House for the final time of his presidency, ahead of the inauguration of Joe Biden.

The US President pumping his fist and giving a thumbs-up as he walked with wife, Melania to an helicopter which flew to nearby Andrews base, where he is expected to speak, and will then board Air Force One plane for Florida. He is the first president to snub his successor’s inauguration since 1869.

Meanwhile, Biden will take the oath of office by noon (17:00 GMT) in Washington, which has been fortified following a deadly riot at the Capitol this month.

About 25,000 troops will guard the inauguration ceremony, which will be missing the traditional hundreds of thousands of spectators due to the coronavirus pandemic.

Alongside Biden, Kamala Harris will make history when she is sworn in as the nation’s first woman vice-president.

Ahead of his inauguration, Biden on Wednesday set out 15 executive actions he would take immediately, covering climate, equality, immigration and coronavirus.

Biden will be sworn in as 46th president of the United States by Supreme Court Chief Justice John Roberts outside the US Capitol.

There is extra-tight security after the Capitol was breached by violent pro-Trump protesters on January 6.

Among those present will be three former presidents: Barack Obama – whom Biden served for eight years as vice-president – Bill Clinton and George W Bush.

Aides say Biden, a Democrat, will use his inaugural address of about half an hour to deliver an optimistic call for national unity after his Republican predecessor’s turbulent tenure.

Minutes beforehand, Vice-President-elect Harris will be sworn in, becoming the first woman and the first black and Asian-American elevated to serve in a role a heartbeat from the presidency.

There will be musical performances from Lady Gaga – who will sing the national anthem – as well as Jennifer Lopez and Garth Brooks.

An evening concert at the Lincoln Memorial in the city will be hosted by Tom Hanks and include Bruce Springsteen, John Legend, Jon Bon Jovi, Justin Timberlake, and Demi Lovato.

Biden, a Catholic, plans to attend Mass on Wednesday morning at a cathedral in the city with the four top congressional leaders – both Republicans and Democrats.

Watch some videos of Donald Trump leaving the White House below;

Donald Trump leaves the White House for the final time after four tumultuous years as 45th US presidenthttps://t.co/jr8QZlPStJ pic.twitter.com/ruFxs7Ie5t

Texas, Mississippi To End Mandatory Use Of Mask, Allow Businesses Reopen At Full…