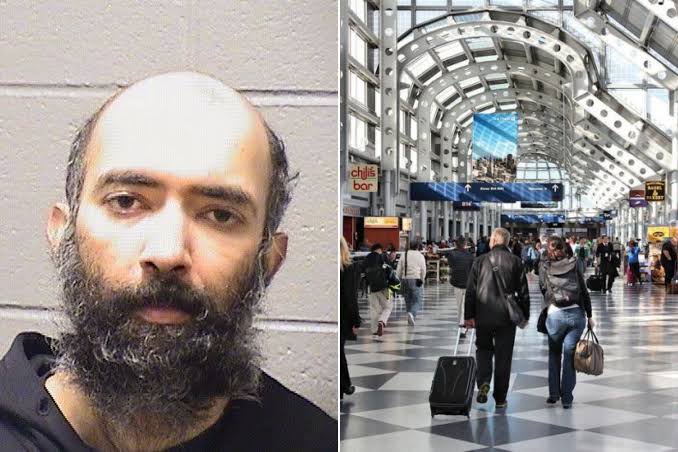 A 36-year-old California man spent three months living in a secure section of Chicago’s O’Hare International Airport, claiming he was ‘too scared to fly home to Los Angeles because of COVID-19‘.

Aditya Singh arrived at O’Hare International Airport from Los Angeles on October 19, but with coronavirus cases continually rising in the US, he found himself too afraid to catch another flight out.

After coming across an employee’s Identification Card, he resigned himself to staying in the airport, where he allegedly continued to live in the security zone until Saturday, January 16 when he was discovered.

Singh was caught on Saturday after two United Airlines employees asked him for identification.

The badge he displayed belongs to an operations manager who had reported it missing on October 26, so the employees then called the police.

Singh has now been charged with felony criminal trespass to a restricted area of an airport and misdemeanor theft, NBC Chicago reports.

The man, who has a master’s degree in hospitality and no criminal background, said he survived on food from other airport passengers.

Singh is unemployed and lives with roommates in Orange, Los Angeles, according to assistant public defender Courtney Smallwood.

It shows how things can slip through the cracks. You get an idea at the airport and can go two weeks without being detected. It’s really remarkable that in this day and age and security, this occurred.

It is not clear whether Singh left the airport between arriving on October 19 and being arrested last weekend, adding that his reason for traveling to Chicago was yet unknown.

Chicago Department of Aviation, which is responsible for O’Hare and the city’s other airports, released a statement saying that the incident ‘remains under investigation‘.

We have been able to determine that this gentleman did not pose a security risk to the airport or to the traveling public. We will continue to work with our law enforcement partners on a thorough investigation of this matter.

Schwieterman stated that the ‘good news‘ was that there was ‘no real risk to safety here‘, adding;

A lot of people no doubt look back and are embarrassed – gate agents – that probably saw this individual. It just shows how different parts [of the airport] may not talk to each other, question each other.

Being in a secured part of the airport under a fake ID badge allegedly, based upon the need for airports to be absolutely secure so that people can feel safe to travel, I do find those alleged actions do make him a danger to the community.

The Judge then set Singh’s bail at $10,000 and ordered him to go onto electronic monitoring if he is released from jail.

The defence requested that Singh be allowed to fly home as his case works its way through the court system, but he is barred from entering the airport. Singh is due back in court on January 27.