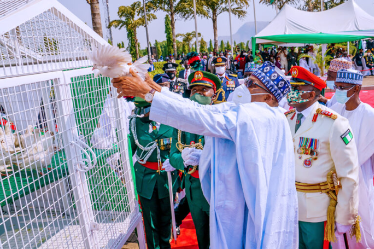 The President had opened the birdcage at the National Arcade in Abuja, picked up one of the doves, and thrown it into the air, hoping for it to fly away but the bird only landed on top of the cage and refused to take flight.

Buhari attempted to aid the other birds in flying by opening the roof of the cage but most of the birds remained adamant and decided to sit on top of the cage’s roof.

The President, who appeared tired of trying, soon left the birds and returned to his seat. However, moments after, some of the birds flew.

The ritual of releasing doves is to commemorate the life of a departed loved one and is common at significant events like funerals or memorials. It also signifies peace.

A similar incident happened in 2014 when doves refused to fly after former President Goodluck Jonathan freed them. Spiritual Director of the Adoration Ministry Enugu, Rev Fr. Ejike Mbaka, back then described the incident at the time as a sign that God had abandoned Jonathan.

In Vatican City (headquarters of the Roman Catholic Church) stopped the bird-releasing ritual in 2014 when two birds released by Pope Francis refused to fly out of the window of the papal apartment. It required several attempts to get the birds to fly out over a crowd of spectators.

Also, a similar incident occurred at an event where Pope Benedict XVI released doves during a Holocaust remembrance event in 2014. The doves were attacked by a gull, with one dove being singled out and injured, according to Wikipedia.

The refusal of the birds to fly on Friday has however sparked reactions from thousands of Nigerians on social media.

Many Twitter users believe that the incident is a bad omen for Nigeria, saying it means that the spirits of the dead still hovers around and that there is no peace in the country.

However, studies have show that domesticated doves which are used to living in cages are not always keen on flying when given the opportunity.

See some other reactions below;

The pigeons aired the president. pic.twitter.com/1RZXLeSVKL

Pigeon leader : I saw a letter in my pigeon hole that nobody should fly abeg, he’s going to order them to shoot us too.

These pigeons reminds me of some Nigerians, no matter how much you show them the light, set them free on the right path, they will still return to their cage. They love their slave masters & don’t know what to do with freedom when they get it.

I guarantee you… If it was possible, the DSS would arrest the pigeons for such an affront on the President.

But really, is there peace, harmony and security in the land?

Omo the Pigeons refused to fly high o😭🥴😬 Some no even gree fly at all. https://t.co/kpAD2HyABP

The bird might have flown if Buhari spoke Pigeon, instead of correct english.

Caged birds will fly once the cage is open.

My man opened the cage, they even tried to push the pigeons to fly. Omo them no gree 😭😭😭.

Hmmm. Even the pigeons in Nigeria.

Nothing moves in this country, not economy, not even pigeons pic.twitter.com/u4b8cNwCiz

*Buhari to the pigeons*

Fly or go to jail

Nothing goes forward with Buhari, not the economy, not the Youths, not Businesses & not even Pigeons pic.twitter.com/sOmdoZaito

‘He’s So Insensitive’ – Nigerians Slam Apostle Suleman For Boasting About…