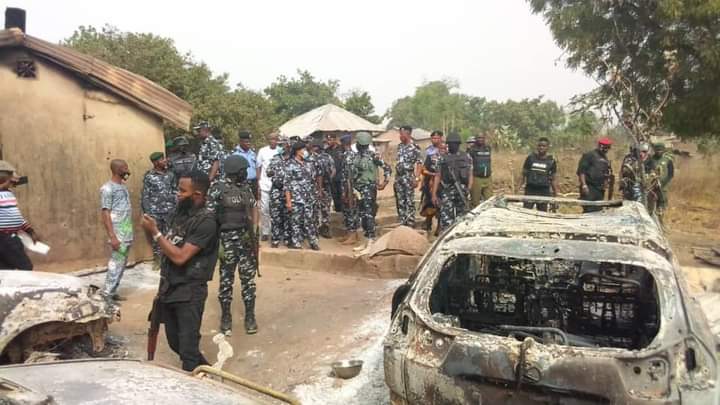 Special Adviser to the Governor on Security Matters, Mr Fatai Owoseni led the government delegation to Igangan, while the Deputy Chairman of Oyo State Council of Obas, Oba Francis Alao, who is the Olugbon of Orile Igbon in Surulere Local Government Area of the state, led delegate of monarchs.

They also visited the scene of violence where houses and vehicles burnt in the community were razed last week.

Trouble started on Friday after Sunday Adeyemo, a youth leader better known as Sunday Igboho, stormed the area with his supporters, following the expiration of the seven-day eviction notice he had earlier issued to the herdsmen.

Some yet-to-be-identified persons had also set ablaze some buildings and cars, including those belonging to Saliu Abdulkadir, Serikin Fulani of Oyo, demanding that he and other herdsmen vacate the area.

Prior to the eviction notice, there had been reports of killings and kidnappings alleged to have been carried out by herders.

Governor Seyi Makinde had ordered the police to arrest anyone found stoking ethnic tension while Mohammed Adamu, inspector-general of police (IGP), ordered that Igboho be arrested for inciting the people.

There has been tension in the area since the incident. Fadeyi, however, said there is relative calm in the area and that the security situation is in no way compromised.

Yes, the CP and management team with the team from the government house led by the SA security are present here in Igangan to broker peace between the Fulani and Igangan people.

Yes, there is relative peace by all and sundry, while the security here is not threatened in any way.

On their parts, the delegates pleaded with the youths to allow peace to reign and assured them that the police and other security agencies would carry out a thorough investigation into the crisis in order to find a lasting solution to the security challenge in the area.

The Olugbon pleaded with the people to eschew violence, saying there would not be development in any community devoid of peace.

He assured them that the government would intensify efforts to ensure that insecurity in the area was stopped permanently, adding that they should not allow the issue to degenerate into an ethnic crisis.

On his part, Owoseni told youths that violence would not solve the problem but assured them that government would work more with the people to ensure their security and development.

Meanwhile, the commissioner of police assured residents of the state that proper investigation would be carried out into the issues with a view to finding a permanent solution to them.