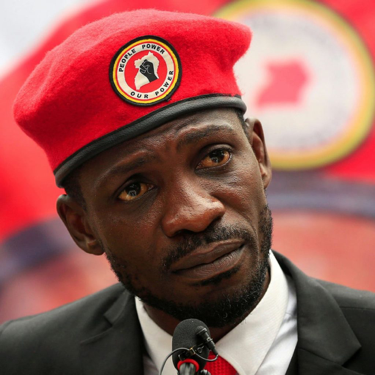 Ugandan Presidential candidate, Bobi Wine, whose real name Robert Kyagulanyi, has on Monday raised an alarm over military invasion of his offices.

The allegation follows the re-election of Uganda’s longtime President, Yoweri Museveni for the sixth term.

Museveni, who has been in office for 35 years, over the weekend won Ugandan election re-elected for another five-year term as the president of the country, amid allegations of fraud and lack of transparency.

The country’s election commission confirmed that Museveni won 58.64% of the nearly 10 million ballots cast, while opposition leader Bobi Wine had 34.83% of the vote.

Bobi Wine has now revealed via his Twitter page on Monday that heavily armed military and police raided his party offices in Kampala and restricted movement.

The tweet, written by an administrator as Uganda remains under an internet blackout, said;

HAPPENING NOW: Heavily armed military and police have once again raided our party offices in Kampala. No one is allowed to go in or come out. Museveni after committing the vilest election fraud in history has resorted to the most despicable forms of intimidation. (ADMIN)

HAPPENING NOW: Heavily armed military and police have once again raided our party offices in Kampala. No one allowed to go in or come out. Museveni after committing the most vile election fraud in history, has resorted to the most despicable forms of intimidation. (ADMIN)

This is not the first time Bobi Wine will be intimidated by the military. It would be recalled that on Friday, he alleged that he was under house arrest after the military invaded his house.

He has not left his home since he went out to vote in the election on Thursday, and on Friday said he was under “siege” as soldiers and police surrounded his home, preventing anyone from entering or leaving.