Arnaut Danjuma scored the only goal as Bournemouth picked up a crucial 1-0 win over Championship promotion rivals, Watford in an ill-tempered game which both teams finished with 10 men.

The Bournemouth’s winger fired the winner – his seventh goal of the season – 16 minutes into second half to end the Cherries’ (Bournemouth) two-matching losing run.

Steve Cook, Bournemouth’s defender, took a quick free-kick in the 61st minute and released Danjuma to fire past Bachmann at his near post from a tight angle.

The closest Watford came to an equaliser was when Ismaila Sarr fired wide after racing in behind Kelly.

Bournemouth’s victory was marred by a multi-player stoppage-time brawl, with minutes remaining in the second tier encounter. There was a fracas between both teams after Watford’s striker, Joao Pedro was sent off in the closing stages for a second yellow card. 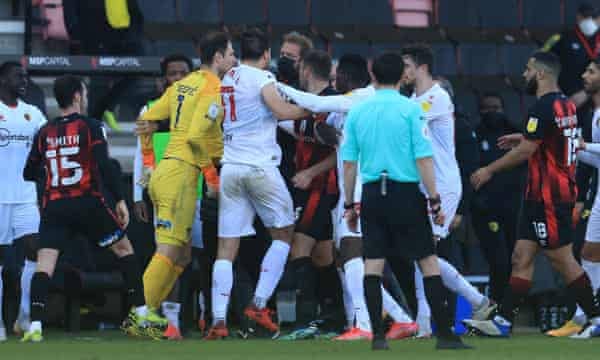 The officials of both sides ended up having to get on the pitch with players showing how high emotions were at the end of the game which ended 1-0 to Bournemouth.

Bournemouth’s midfielder, Jack Wilshere ended up getting sent off by referee Tony Harrington for his part in the incident with two yellow cards in stoppage time for the sub who was on the field for 15 minutes. Watford’s Ismaila Sarr was also booked.

The victory lifts Bournemouth up to fifth in the Championship table ahead of the rest of Saturday afternoon’s action.

Second-placed Brentford and fourth-placed Swansea will be thanking the Cherries for halting Watford’s momentum.