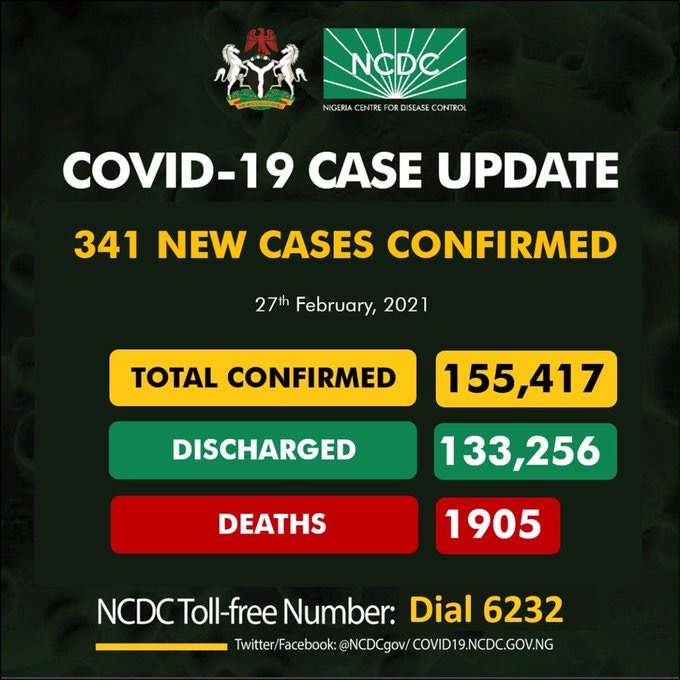 Nigeria on Saturday recorded its lowest daily infection and death toll since the beginning of the second wave of the pandemic last December.

Nigeria Centre for Disease Control announced 341 new cases on Saturday, indicating a significant decrease from the 521 new cases reported about a week ago as the lowest daily figure this year.

Lagos had the highest toll in Friday’s tally with 96 new cases followed by Rivers and Kaduna with 41 and 33 infections respectively.

However, in the past one week, daily cases have fallen below 700 suggesting the country had gone past the worst phase of the viral infection.

The latest figure raised the infection toll to 155,417 in total.

✅319 community recoveries in Lagos State, 121 in Kaduna State and 38 in Rivers State

✅Data from Kaduna State recorded for 26th and 27th

Three deaths were also recorded Saturday indicating a drop from the 11 fatalities recorded on Friday. The new deaths raised the death toll to 1,905 in total.

However, health experts believe the official data of infections and deaths are underreported because of the country’s limited testing capacity.

Nigeria, Africa’s most populous nation, has so far conducted test figures less than one per cent of the country’s 200 million population.

Although people who recover from a viral infection often develop immunity against the same disease, it remains unclear whether this is the case with COVID-19 infection.