Kagara Students Yet To Be Released, Niger Govt Official Clarifies 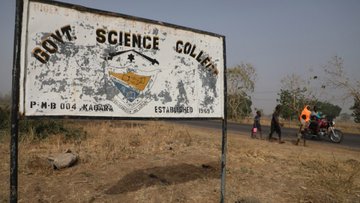 Niger state government official has clarified that the 27 students, three staff members and 12 members of their family kidnapped by bandits from Government Science College Kagara in the state, were yet to be released.

The report of their release went rife on social media on Sunday night, after Chief Press Secretary to the Niger governor, Mary Noel-Berje, about 10:30 p.m. told PremiumTimes they had been released.

However, giving an update soon after, Ms Noel-Barje expressed that she was referring to the release of a some commuters who were kidnapped from Niger State Transit Authority (NSTA) bus last week, few days before Kagara school was attacked.

MDB earlier reported that Niger state government secured the release of all the passengers abducted and were taken to the state house to meet with the governor.

Meanwhile, Niger state government has said it is intensifying efforts to also secure the release of the Kagara Government Science College students, Staff and their family members.

Government is intensifying efforts to also secure the release of the Kagara Government Science College students, Staff and their family members.

Federal Government has expressed hope that the students will be released unhurt and without any payment of ransom as negotiations were ongoing with the bandits.

Kidnapping for ransom has become rampant in many parts of Nigeria. In Niger and many other states in North-central and North-west Nigeria, armed bandits kill and kidnap at will despite the efforts of security agencies.