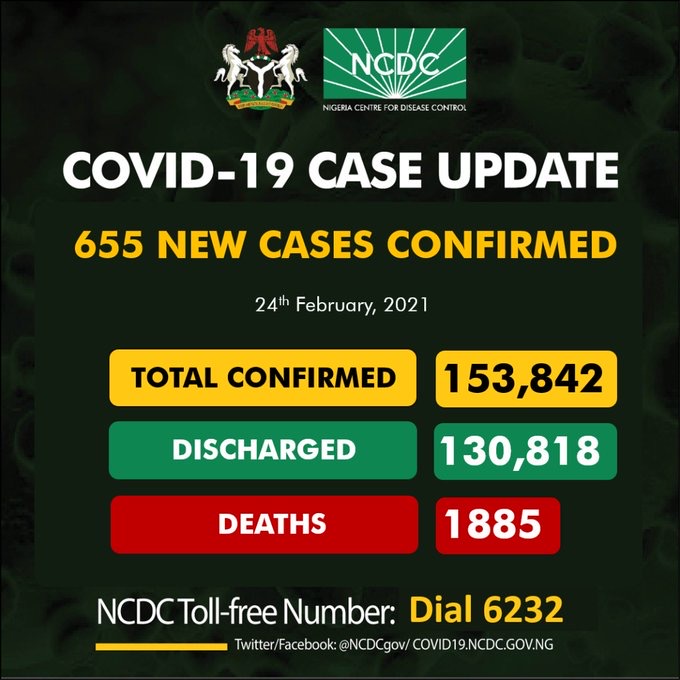 The new cases on Wednesday raises the total number of infections in the country to 153,842, according to the infectious disease agency, NCDC.

Lagos had the highest daily figure with 240 new cases, followed by Ogun and Rivers with 88 and 56 cases respectively.

However, in nearly a week, daily cases have fallen below 700 suggesting that the worst phase of the viral infection may be coming to an end.

Wednesday’s figure is slightly higher than the 571 cases recorded on Tuesday, the 542 on Monday and the 521 on Sunday which is the lowest daily toll this year.

Meanwhile, the death toll from the disease has relatively been on the rise with 11 deaths from COVID-19 on Wednesday raising the total fatalities in the past six days to 82.

About 12 people died from the viral infection in the previous 24 hours. Nigeria’s fatality toll is now 1,885 in total.

Health experts say low testing in Nigeria masks the severity of the outbreak, a situation considered the biggest challenge in the nation’s management of the outbreak.

Nigeria’s health minister, Osagie Ehanire, on Monday said persons at risk of contracting the COVID-19 virus are among those reluctant to accept hospital admission.

Nigeria is expecting its first batch of COVID-19 vaccines in March, Mr Ehanire said on Wednesday, adding that the initial target of February may not be met.

He made the statement same day Ghana became the first country in the world to receive free COVID-19 vaccines (600,000 doses) under the COVAX arrangement of the World Health Organisation.

The four million doses Nigeria is expecting in early March is also from the COVAX arrangement.