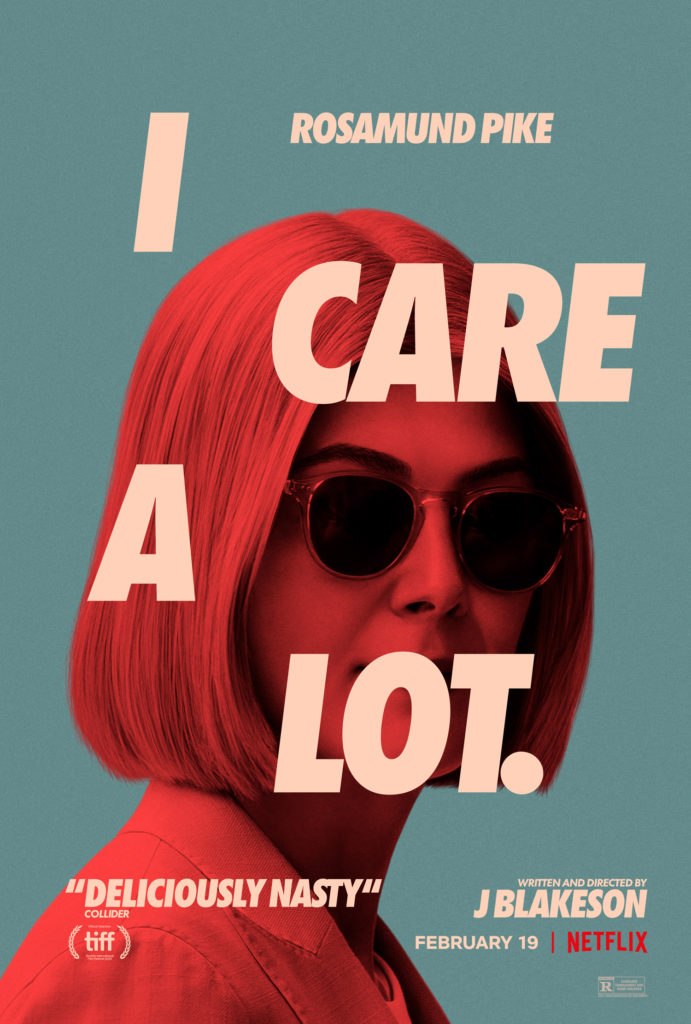 These were the emotions that raged through me when I saw I Care A lot. This movie whose title is a painful but apt irony is everything you weren’t expecting to see. While it may be uncomfortable to watch because of the level of the characters’ moral depravity, it makes for a one of a kind storyline as far as film today is concerned.

Rated 18+, I Care Alot produced and directed by J Blakeson stars Rosamond Pike as an inveterate con-woman Marla Grayson. Grayson makes her living off fraudulent and forceful guardianship of the elderly. She does this by persuading a clueless judge to appoint her guardian over elders living on their own, under the guise that they suffer from dementia or other diseases synonymous with the elderly and cannot take care of themselves. She connives with dirty Doctors who profile patients , and tag the ‘best victims’ – elderly rich people with no family or close ties- ‘cherries’.  One of such is co actor Diane Wiest.  She plays victim/feisty elderly lady Jennifer Peterson who should have been Grayson’s nemesis.

I have a love hate relationship with this plot.

On the one hand I think J Blakeson shed light on this cankerworm eating into the veil of the American society, i.e guardianship fraud. Until I saw this movie, I had never heard of it, so I give him kudos for that. But otherwise, there were many inconsistencies with this story.

Read also: The White Tiger: An Interesting Flip On The Rag To Riches Trope

One of them is the fact that Marla’s character was exaggerated in trying to show just how strong willed she was. The character in question was kidnapped by the ‘RUSSIAN MOB’, known for its ruthlessness. Yet in what can only be described as sheer insanity bothering on unrealistic, Marla decides to taunt and act braggadocios. This unsurprisingly earns her a death sentence as Lunyov orders that she be ‘finished off’. But alas! She somehow miraculous survives despite being injected with a deadly substance, amongst other things done to make sure she was truly ‘finished off.’ And oh, this same Russian mob also somehow failed in murdering her partner Fran (Eiza González). Common, we’re talking about a mob here, the Russian Mob for that matter! Little wonder the genre is categorised as ‘dark comedy’ because it was just preposterous, to the point of being comical. And this is just one of inconsistencies I found with the story. Wouldn’t want to say too much, enough spoilers already.

Another problem I had with the plot was that there was nothing to really look forward to. It was uncomfortable to watch from the beginning to the end even though I admit it was somewhat interesting.   I however kept hoping for some form of change in the storyline that would usher in some light, and give the plot some depth and texture but it never came. The plot is basically evil triumphing over evil, and then collaborating together. Not a big deal considering that in real life the good guys don’t always win, but still I would have loved to see some digression by the introduction of one or two other characters that would have been breaths of fresh air.

In the first few scenes, I wasn’t sure Pike was believable as Marla Grayson. She appeared devoid of emotion, stone cold and I wasn’t impressed with the delivery. But as the movie played out I found that that was the whole point. Pike was supposed to be stone cold. It is who she was in this movie. And boy did she deliver despite the somewhat superficial script. She embodied Marla Grayson well, and found myself disliking her character more with every scene. But that was the whole point, her character was despicable. 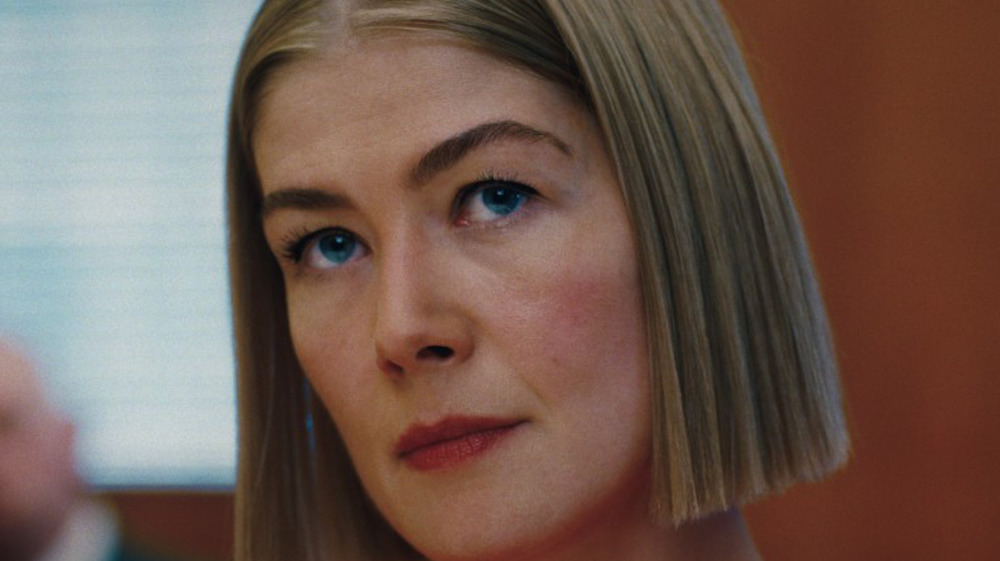 Dinklage on the other hand is a critically acclaimed actor and here, many critics say he delivered, per usual. I however sadly disagree. Dinklage is one of the finest thespians in the movie industry and I expect nothing but excellence every time. In I Care Alot I thought there was a bit of overacting, which could possibly be from the direction. As an erratic Russian Mobb Boss, I wasn’t really sold. Didn’t feel the aura and in some of his scenes I found myself rolling my eyes at the ridiculous of it all. But again the producers say the movie is a dark comedy so perhaps that explains it.

Read Also: After Almost 2 Years, Was Season 8 Premiere Of Game Of Thrones Worth The Wait?

Diane Wiest who played Jennifer Peterson was exceptional but under-utilised. After she realised that Grayson was a fraud, she taunts and threatens Grayson in ways that sent chills down my spine. I had hoped to see more of her , but unfortunately that didn’t happen. This to me was another hole in the plot.

Her character is one that J Blakeson could have explored more and she would have carried it exceptionally well.

Fran played by Eiza González was awesome in this movie. She played Grayson’s gay partner and pulled it off effortlessly well. As a straight person it was interesting to see the relationship dynamic of Fran and Grayson and I must admit the chemistry permeated through the screen. Their love was believable, and appeared genuine. Grayson in the film’s commentary described herself as a Lion, and her doggedness which bothered on insanity was without question. However despite this, Fran brought a softness to her that somewhat brought a welcome kind of balance. The duo worked well together on screen and it was interesting to watch.

Read also: Looking For Something Nice To See This Holidays? Netflix’s ‘The King’ Is IT!

Also throughout the movie we see her sucking a vape which amplified her malevolence. I was curious and sniffed around to see if there was a reason for it.Lo and behold, there was! Pike was asked about the significance of the vape to her character and here’s what she said:

“The backstory of Marla is that she had a vape business until she was Walmart-ed out of business by a great big discount vape store opening across the street, which she was furious about. I think that was her shot at the American dream played fair. She had a small-time business, she was a small-time business owner, she got screwed and then she thought, ‘Right. Chips are down. I’m going all out. I’m gonna play the system like everybody else.’ And I think every time she inhales, it’s bringing that attitude to it. It’s the attitude of having been screwed and now you’re out to screw everybody.”

Technicolor. Think a much subtler version of noise in Uncut Germs( which I never finished watching by the way, was too much for me), but with more vivid colours? That’s what I got here.

The use of bright colours, slow motion, and the non-diegetic music amplified the malevolence of the movie but I liked it. Two scenes in, I could already see the vividness of the cinematography and thought it was good. Doug Emmet whose resume includes ‘Sorry to Bother You’ starring Lakeith Kleinfield which I loved too is the helmsman here.

I saw the theme of feminism and how strong women can be explored in this film  which I liked. I liked that Grayson and Fran used their con abilities without the help of a man to kidnap their nightmare,Roman Lunyov. While I found their survival up to that point ludicrous, I thought the plot to kidnap Lunyov without force or the help of a male accomplice was a nice touch. Typically this is the kind of gut portrayed by men in movies, but I liked that here the women pulled off the kidnap with sheer con and quick wittedness.

In another scenario, we see Grayson try to breakdown patriarchal stereotypes eg the assumption that ‘The Doctor’ is always a man. And the fact that only a man can be determined, and dogged.

However in some scenes where Grayson appeared to tackle sexism, it bothered on her being judged on the basis of the evil her character perpetuated and not necessary the fact that she was a woman. But overall however I like the that J Blakeson attempted to combat sexism and patriarchy through this movie.

I care a lot is not the regular trope you find even where anti-heros are concerned. It will shock you,  infuriate you, but you’ll find yourself wanting to see it through. The twist at the end is very interesting too.

There are two opposites on how people view this film- those who really love it, and those who think it’s trash. Critics say the script could have had more depth but overall laud the performance of the cast. Rotten Tomatoes rates it 80% which I find quite surprising. What do you rate it?