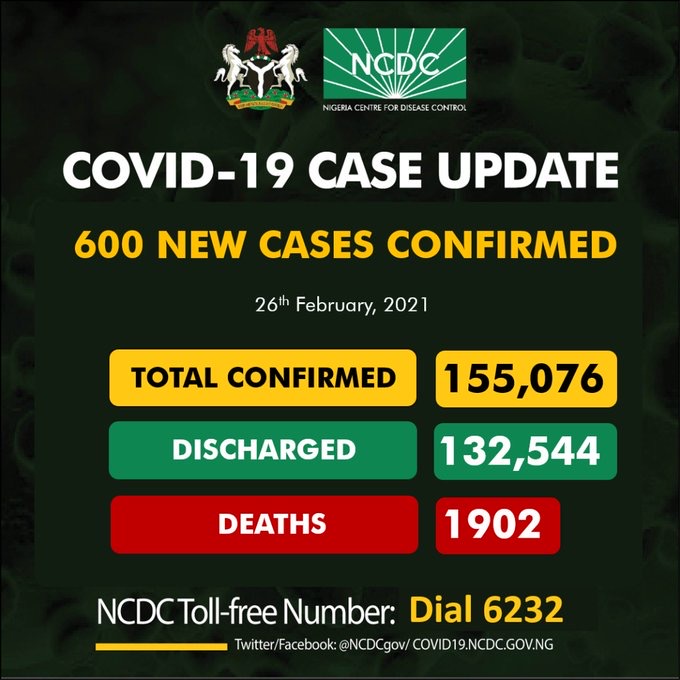 Exactly one year after an Italian traveller on February 27, 2020, became the index case of COVID-19 in Nigeria, more than 155,000 people have been infected with the virus in the country.

COVID-19, the pneumonia-like disease caused by coronavirus said to have emanated from a local Chinese market and has spread to over 200 countries in the world, has also caused over 1,900 deaths in Nigeria.

As at Saturday morning, infection figures stood at 155,076 after Nigeria Centre for Disease Control announced 600 new cases from 21 states on Friday night.

Meanwhile, more than two-third of the over 155,000 people infected by COVID-19 in Nigeria have recovered after treatment.

The record indicates the level of success the country’s health professionals have recorded in containing the virus.

✅204 community recoveries in Lagos State, 124 in Kwara State, 121 in Osun State and 73 in Rivers State managed in line with guidelines.
✅Data from Taraba State recorded over the last two days.

Meanwhile, nearly half of Nigeria’s infections were recorded this year with about 70,000 infections reported since January 1, 2021.

However, in the past one week, daily cases have fallen below 700 suggesting the worst phase of the viral infection may be coming to an end.

While infections appear to be slowing, the death toll from the disease has been relatively high with 11 fatalities on Friday raising the total fatalities in the past eight days to 99. Nigeria’s fatality toll is now 1,902 in total.

However, health experts believe the current data of both infections and deaths are not the actual figures due to the country’s limited testing capacity.

Meanwhile, about 21,000 infections are still active in the country and has so far conducted 1,489,103 tests of the country’s over 200 million population.

Read Also: WHO: Nigeria To Receive 60 Million AstraZeneca Vaccine From End Of February

Nigeria hopes to vaccinate more than half of its 200 million citizens in the next two years. But the country is yet to receive its first batch of vaccines with the first four million doses expected in March after the initial February target was extended.