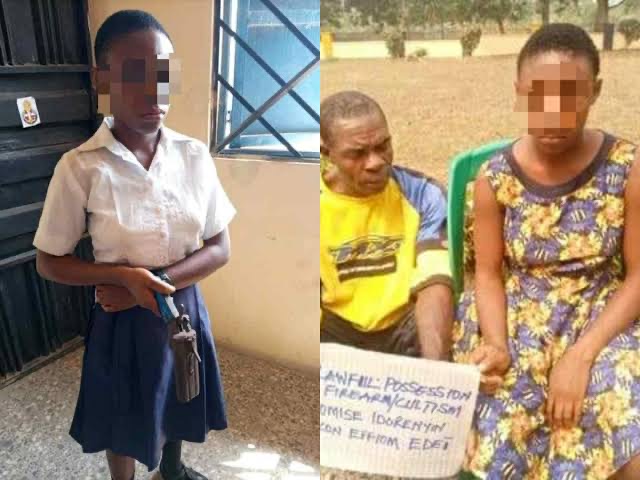 Cross River State Police Command has on Friday, February 19 paraded a schoolgirl who was caught with a gun in school.

Her boyfriend who allegedly gave the gun to her and 11 other suspected criminals were also paraded.

It was widely reported few days ago that the young lady, identified as Promise Idorenyin took the gun to school to shoot a teacher who told her to tint her coloured hair back to black

The Commissioner said the double-barrel gun was discovered in her school bag by the principal of the school.

The suspect admitted that the said firearm was given to her by her boyfriend of Abasi Effiom Village in Akpabuyo LGA.

The girl was identified as Promise Idorenyin, while her boyfriend is a 38-year old man named Okon Effiom Edet.

Narrating what happened, the teenager said her boyfriend asked her to take the gun to the blacksmith for repairs but she took it to school to show her friends.

When asked how long she had known the boyfriend, she said;

It was August last year. He supports me with some school things but my parents said he should not pay my school fees.

She said her parents know Edet because he comes to her room.

When Promise was asked why she took the gun to school, she said “nothing.”

Asked whether it was true she wanted to take it to the blacksmith to fix it, she said, “Yes, that is what he (boyfriend) told me. I don’t have any problem with my teachers.”

She denied telling her classmates that she took the gun to school to shoot the teacher.

Promise said she tinted her hair in December and when the vice principal asked her to paint it black, she did.

“It was coloured, I painted it black,” she explained.