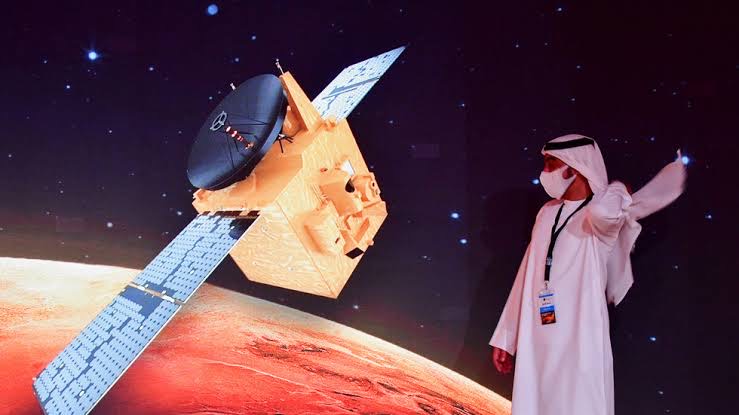 United Arab Emirates has made history as the first Arab country to reach Mars, after a successful Emirates Mars mission named Hope probe.

The Emirates Mars mission reached the red planet at 7:42 p.m. Tuesday UAE time, and sent its signal back to Earth just over half an hour later. The ground control team at the Mohammed Bin Rashid Space Centre in Dubai erupted in cheers.

The venture marks the 50th anniversary of the unification of the UAE’s seven emirates.

UAE, China and the United States all launched missions last July, taking advantage of a period when Earth and Mars are nearest.

The current time period during which Earth is closest to the red planet occurs only once every two years.

204 days and more than 480 million kms later, the #HopeProbe is now in the Capture Orbit of #Mars.

204 days and more than 480 million kms later, the #HopeProbe is now in the Capture Orbit of #Mars #ArabsToMars

Experts estimated the chance of successfully entering Mars’ orbit at about 50%, since more than half of all Mars missions actually fail.

The crucial time window was a terrifying and suspenseful 27 minutes during which Hope probe had to dramatically slow down from its speed of 100,000 kilometers per hour (62,137 mph) to 18,000 kph by firing its six thrusters for exactly 27 minutes.

This used up almost half of its fuel, enabling it to be caught by Mars’ gravitational pull and enter into its orbit. There was then a roughly 11-minute communication delay back to Earth as the scientists and engineers involved in the project — which include some 200 Emiratis — waited in tense anticipation to find out whether the mission was a success.

This makes UAE only the second country to ever successfully enter Mars’ orbit on its first try, despite attempts being made since the 1960s. The only other country to have done so is India.

Several governments and luminaries in the field expressed their congratulations, including the U.S. State Department, the Indian government, the U.K. Space Agency and celebrity scientist Neil DeGrasse Tyson.

The Hope probe, a $200 million project called Al-Amal in Arabic, was launched on July 20 from Japan’s Tanegashima Space Station and has now culminated its journey to Earth’s neighbor.

It will now spend one Martian year — equivalent to 687 days on Earth — studying and gathering data on the red planet’s atmosphere.

That time will enable it to create the first full map of the Martian atmosphere, with the help of three highly specialized instruments developed by the Emirati team.