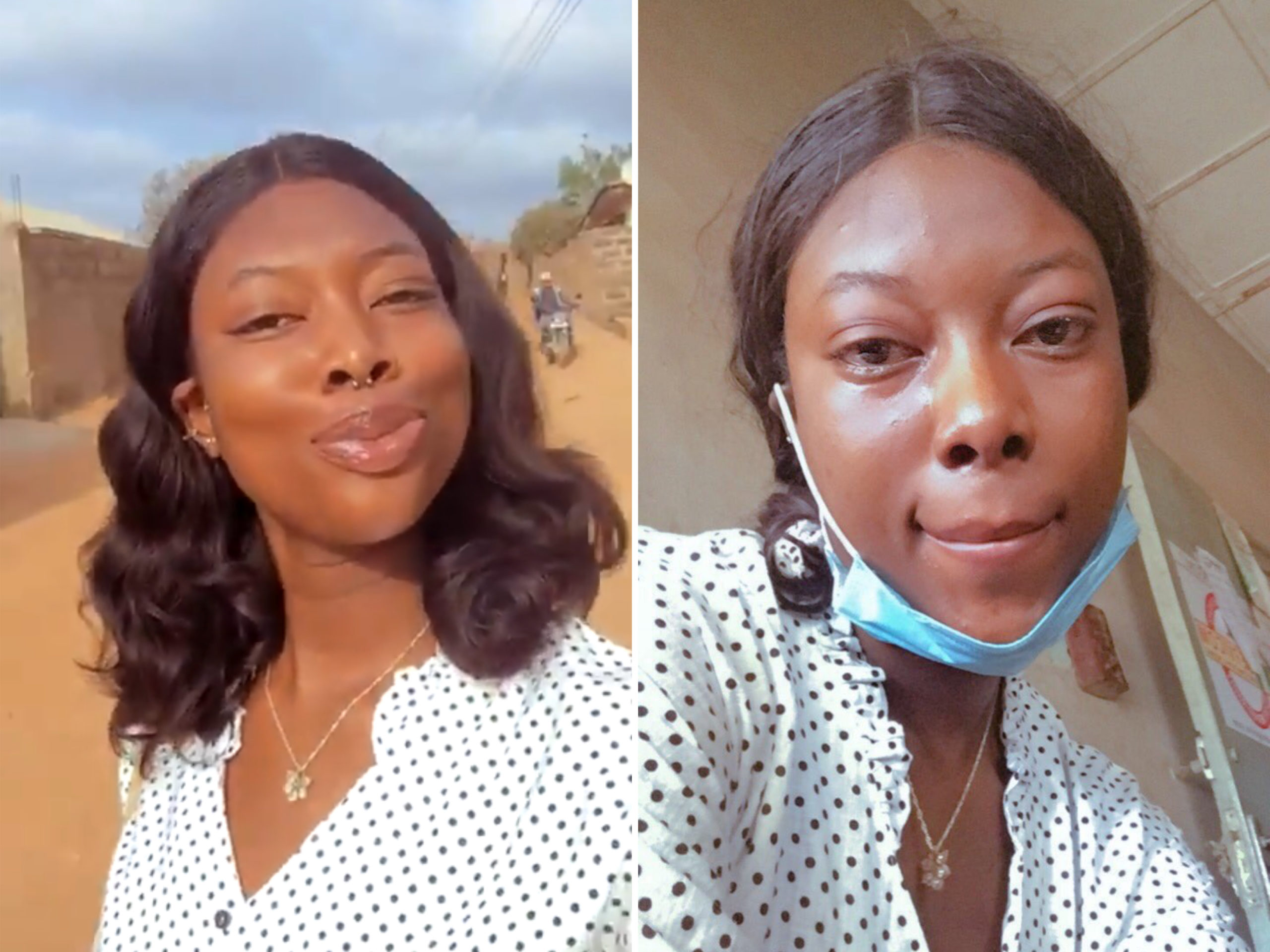 A female student of University of Ilorin has taken to Twitter to narrate how she was forced to remove her nose ring and pack her hair by the school’s security officials.

The student, who tweets with the handle @tannwa_, initially shared video of herself before she got into the school premises before she claimed Unilorin ruined her day.

This is how I left home for school 😊🤗then unilorin ruined my day check next post 😭😭😭😭😭😭💔💔💔💔 pic.twitter.com/93dvYZcM5w

In her follow up tweet, the young lady shared photos of herself with teary eyes rid of the nose ring and her hair packed.

The incident has left Twitter users divided over if the lady erred through her dressing.

While some defended the lady and called the school old fashioned, claiming archaic ethics are being forced on students, others stated that she acted against the school’s dress code and should therefore be cautioned.

You already know the rules in Unilorin, just follow their rules within ur hours in school.

You can show off the real you Off Campus✊

Most unilorites can’t construct a sentence without blunders. Including the lecturers
They’re gradually turning the school into a Muslim school but we’re not ready for this discussion.

Coming to twitter to tweet about unilorin dress code lol o. You no attend orientation for 100 level?

Unilorin always in the news, see what they turned federal school into. When Nigeria divides, ilorin must be merged with their northern siblings. All the Christians and other people there should fall out and join the south!

Unilorin is even soft now, if it was during Oloyede administration, the girl for know body🤧

I’m so sorry dear, those people are just miserable 😭 I never wore anything revealing and I’ve been arrested by those guys up to 4 times, there was a particular occasion they took pictures of me and even threatened to rusticate me 😂😭 there were other occasions…

Unilorin is a federal institution, its ethics and way of doin things has nothing to do with ilorin in general, the school constitute of different people from different states in the country, so please dead this thought, criticise the school if u want.

Did you forget?
You know those people take leverage in molesting students..
May God be with you 🙏

Institutions have their rules and regulations, which can’t be enforced on anyone that’s not part of the it. Since u’re still a student & want to remain one, just humble urself abide by their dress code, when out u can go nude and Pierce all part of your body ( even your genital

Unilorin 🤦🏻‍♀️🤦🏻‍♀️🤦🏻‍♀️
They started this rubbish yesterday,dropping people at the school gate for coloured attachments

I must confess, every school has it’s up and down sides. Leaving your parents house simply means you’re leaving your comfort zone. School is only 4 years, except for courses like Engineering and Law. Abide by their rules strictly and grad in peace.

How do you bring your religious and cultural beliefs and impose it on people from different parts of the country just cause you’re in a position of power? Some even include their personal beliefs. Mad people

Sorry about that. Just dress/appear the way they want you to, since you’re still in school. When you’re away from the school environment or done with it you can dress the way you wish. Most times, wisdom is better than strength. You can’t beat these guys. Pele❤️

Ilorin!!!!!🤔
Dat side ehn!🤔
They don’t care if u’re of d same religion 🤷‍♀️
They complain about almost everything..

Hmm!!
The day i went to their market and forgot it was Friday… na koboko dem take beat m cos i no cover head☹🤔

I jejely bought poly bag to cover my head☹

You should just adhere to the rules and regulations of your school,bringing it on Twitter might even backfire,

What are your thoughts on the action of the school security officials?