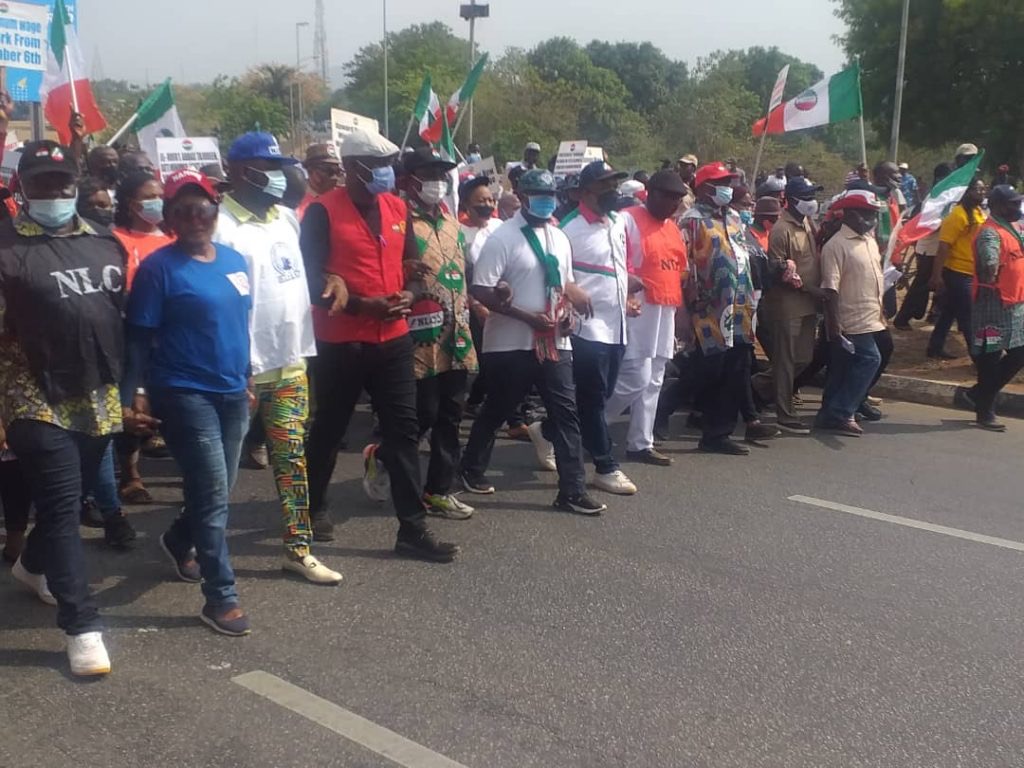 Leadership of Organised Labour in Nigeria has on Wednesday led hundreds of Nigerian workers in protest march to National Assembly complex in Abuja.

The organised labour, which comprises workers from the public and private sector were led by the leadership of Nigeria Labour Congress (NLC) and Trade Union Congress (TUC).

The union and its affiliates are demanding the withdrawal of a bill that would remove National Minimum Wage from the exclusive to concurrent legislative list.

About two weeks ago, House of Representatives introduced the bill which according to the sponsor, Garba Mohammed (APC Kano), would allow both the federal and state governments to freely negotiate minimum wage with their workers “in line with our federalism”.

However, organised labour opposed the bill, saying it would undermine the working class in the country.

The procession caused traffic gridlock forcing motorists to seek alternative routes to avoid being caught in the traffic logjam.

The workers forced their way into the National Assembly premises.

The protesters chanting solidarity songs and carrying placards with various inscriptions arrived the forecourt of the National Assembly at 11am.

They had earlier converged at Unity Fountain in Maitama from where they marched with their banners, placards with accompanying loud music into National Assembly.

The procession of the protesters disrupted vehicular traffic as most lawmakers, staff and visitors alike were forced to make a detour into the National Assembly complex through the Villa and Secretary to the Government of the Federation (SGF) gates.

Commuters and drivers in and around the popular Ahmadu Bello Way, Shehu Shagari Way and Federal Secretariat had a hectic time assessing their destinations while the procession was on.

Deputy Chief Whip of the Senate, Senator Aliyu Sabi Abdullahi met the protesters at the MOPOL gate of the National Assembly and joined them in marching into the main complex.

The protesters were officially received at the forecourt of the National Assembly by the Senate President Ahmad Lawan represented by Senator Sabi Abdullahi and the Speaker of the House of Representatives Femi Gbajabiamila represented by the Leader of the House, Honourable Alhassan Ado Doguwa.

Both Senator Abdullahi and Honourable Doguwa in their remarks assured the Labour leaders and the protesters that that the National Assembly would ensure that the Bill does not see the light of day.

Abdullahi assured the workers that the Bill will be killed the way a similar Bill was killed during the 8th National Assembly.

In his remarks, Hon. Doguwa in his remarks said it was clear that Nigerian workers are against the minimum wage Bill and therefore the House would listen to the wishes and aspirations of the organized Labour in the country.