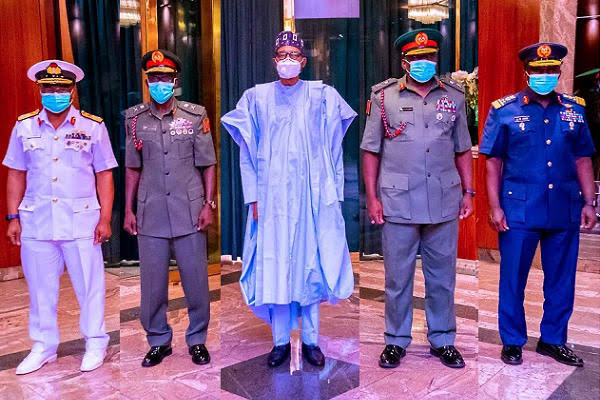 Senate has on Tuesday confirmed the appointment of the newly appointed Service Chiefs.

The confirmation followed the report by Senate Committee on Defence submitted to the Senate plenary.

Senate Committee Chairman on Defence and former Governor of Sokoto State, Senator Wamakko in the report explained that the nominees who were appointed to replace the former ones made themselves available for screening following the upper chamber’s resolution on 3rd February, 2021.

According to him, the Committee was detailed in the screening in line with the relevant sections of the law, particularly with regard to the tendering of their documents, viz: “Educational certificates, NYSC, Code of Conduct and others.”

Senator Wamakko reminded the plenary that the nominees were already in acting capacity in line with the law that established Nigerian military, saying their immediate confirmation would bridge any gap in the force.

That the Senate do receive and consider the report of the Committee on Defence on the confirmation of the nomination of the following persons for appointment as Chief of Defence Staff and Service Chiefs for Armed Forces of the Federal Republic of Nigeria.

Following the confirmation on Tuesday, Senate President Ahmad Lawan advised the new service chiefs to take insurgency war to the terrorists and bandits and dislodge them from their enclaves.

Lawan revealed that the parliament would offer support, which he believes has to be reciprocated by winning the war, adding that a situation where students are abducted from schools is no longer acceptable.