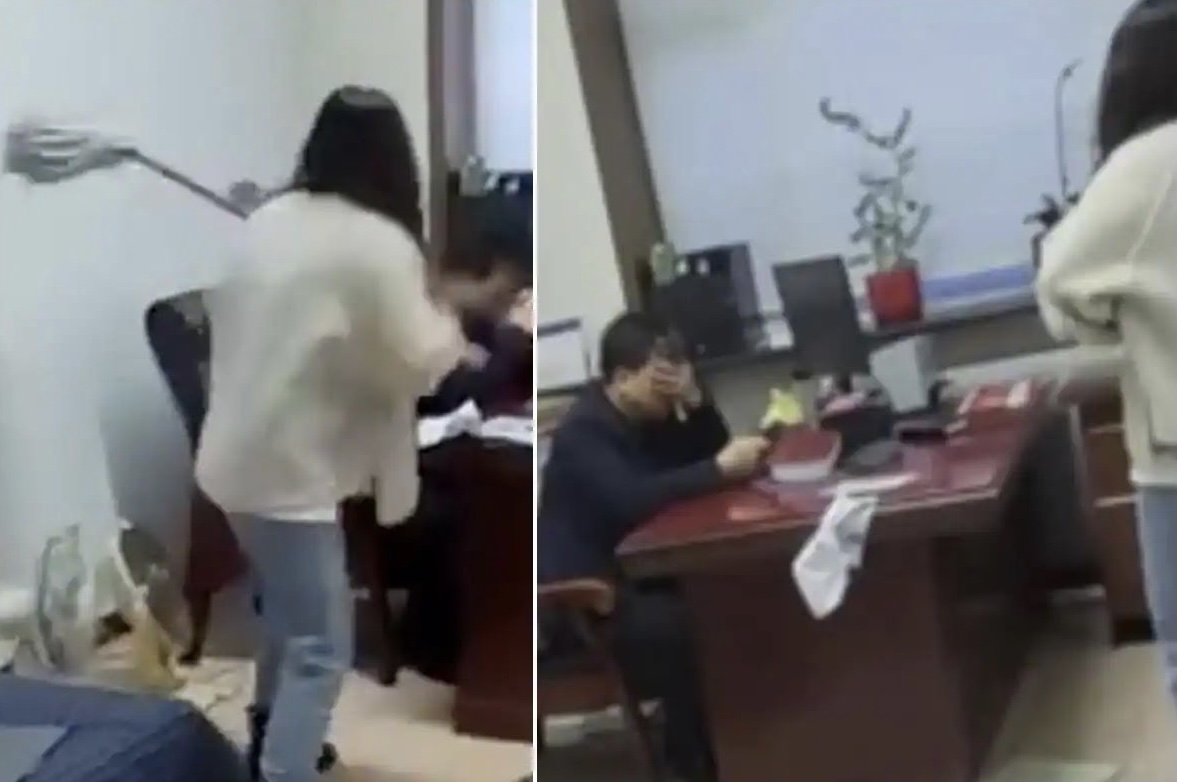 A female government worker in China has become an internet sensation, after she was seen in a viral video using a mop to beat up her male boss for sending her harassing and lewd text messages.

According to Chinese state news media, the incident happened in a government poverty alleviation agency in Beilin district of Suihua, in China’s Heilongjiang Province.

The woman, identified as Zhou (her surname), can be seen attacking her boss at occasional intervals throughout the video.

Speaking in Mandarin (Chinese language), she says that he sent her unwanted messages on three occasions, and that others at her workplace got similar unwanted advances. She also says she’s reported him to police.

As for the boss, identified as Wang, he never gets up from his desk chair at any point in the video as he is being hit. He hides his face behind his fingers and attempts to apologise, saying that he had been joking when he sent the messages.

Also in the video, Zhou is also seen making phone calls, claiming the man had sent harassing texts to multiple women in the office.

The video has gone viral, and many have hailed the woman as a hero for standing up to her superior and fighting to protect herself and her coworkers.

Another woman not seen in the video says, “How is it a joke? It shows that you have bad character Have you thought about consequences for your office?”

Although it is not clear when exactly the incident happened, Zhou filed a police report last week that accused Wang of harassment. Also, the video began to circulate around the Chinese micro-blogging site Weibo this week.

Following the circulation of the video, an internal investigation found that the boss, who was a director at the agency, had ‘life discipline problems‘ and was fired from official duties.

In 2005, a law was introduced in China that intended to prohibit sexual harassment and allow workers to report their employers. Successful lawsuits are reportedly rare due to most cases coming down to witness accounts without tangible evidence.

A prominent Chinese female activist, Lu Pin in an interview with The Times, said the video’s popularity could be chalked up to pent-up anger towards harassers who are able to operate without consequences.

Most of the time, women are forced to stay silent because it is hard for sexual harassment to be investigated. This woman took matters in her own hands to protect herself; that her behavior is gaining so much attention is a reflection that there aren’t better ways.

As for Zhou, she was not disciplined. Officials did say that she had a “mental illness,” though that wasn’t elaborated upon.

‘I Am So Sorry’ – Ellen DeGeneres Publicly Addresses…

Journalist Oluwatosin Adeshokan Apologizes After Being…