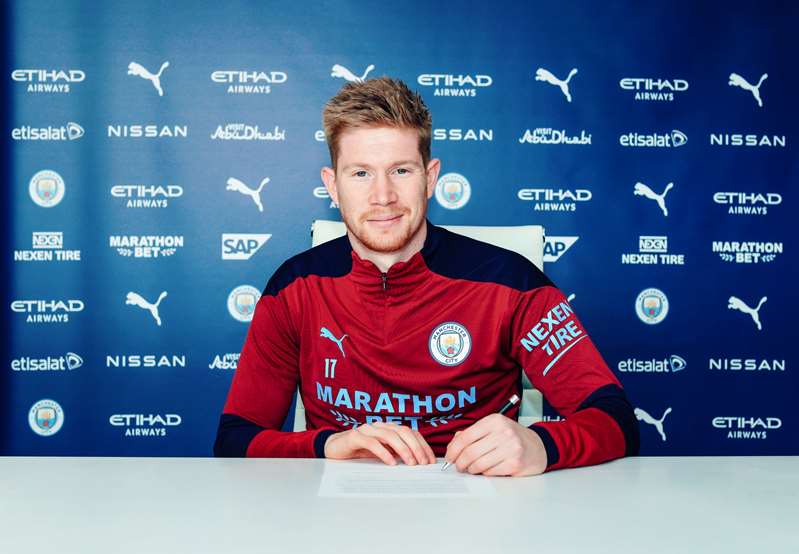 Kevin de Bruyne has ended speculation over his future in Manchester City by signing a two-year contract extension that will see him stay at Etihad until 2025.

The 29-year-old Belgium international existing deal was due to expire in 2023, but has decided to see out most of the remainder of his career at the Etihad.  The new deal will the playmaker earn around £350,000-a-week.

The Belgian has again been instrumental for Pep Guardiola‘s side this season as they chase an unprecedented quadruple- FA Cup, English Premier League, EFL and Champions League.

Despite his campaign being interrupted by injuries, De Bruyne has scored eight goals and provided 16 assists in 33 appearances. He scored the opening goal in Tuesday’s Champions League quarter-final first leg win against Borussia Dortmund and played a part in creating the late winner for Phil Foden.

Speaking about his new contract, He said:

I could not be happier. Since joining City in 2015, I have felt at home. I love the fans, my family are settled here in Manchester and my own game has developed really well. This football club is geared for success. It offers me everything I need to maximise my performance, so signing this contract was a straightforward decision. I am playing the best football of my career and I honestly feel there is more to come.

Pep and I see football in the same way. Having that relationship with a manager is so important to me because our objectives are totally aligned, and we want the same things. My focus now is on ensuring we have a successful end to the current campaign. Our results and performances so far have been excellent, but we need to make sure we end the season with the silverware we deserve.

De Bruyne has a total of 76 goal assists in 255 games so far at Etihad.

Harry Kane Says He Will Stay At Tottenham Amid Manchester…