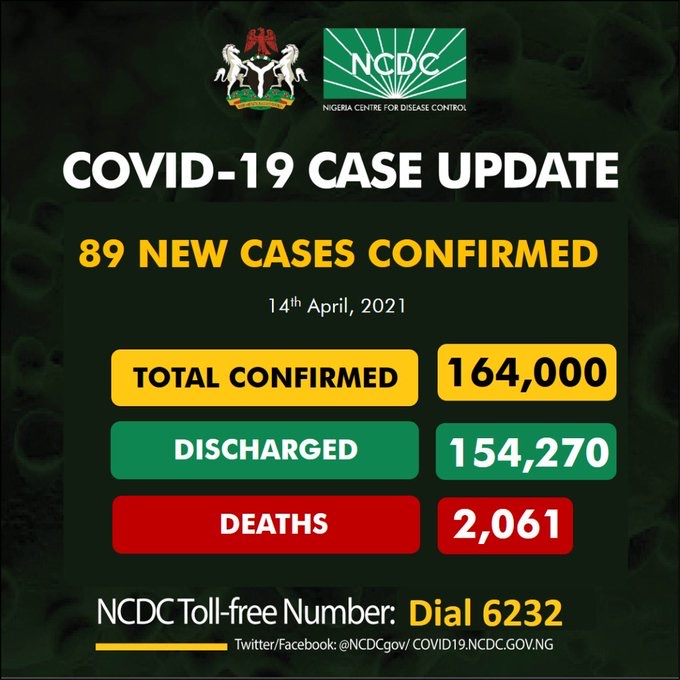 Total COVID-19 infections in Nigeria have reached 164,000 on Wednesday with 89 new cases recorded in 10 states.

The new development is according to an update published by Nigeria Centre for Disease Control (NCDC) on Wednesday night.

Nigeria has had a steady run of low infection figures in the past month. The 89 new cases on Wednesday raised the total number of infections in the West African nation to 164,000.

Daily deaths from COVID-19 have also drastically declined in the past two weeks with no new fatalities recorded from the disease in the past 48 hours.

The fatality toll in the country remains 2,061. as only three deaths have been reported from the disease in Nigeria in nearly three weeks.

More than two-thirds (154,270) of the over 163,000 people infected by COVID-19 in Nigeria have recovered after treatment, while nearly 8,000 infections are still active in the country.

Today’s report includes data from Adamawa State recorded from the 23rd of March, 2021.

It began the inoculation drive on March 5, and so far about a million people have been vaccinated, according to National Primary Health Care Development Agency (NPHCDA).

The current phase covers health workers and other frontline workers although Nigerians from other groups are also getting vaccinated.

Amid concerns over the efficacy of the vaccine, Faisal Shuaib, the head of the agency, said no Nigerian has developed any known severe side effects following the vaccination.