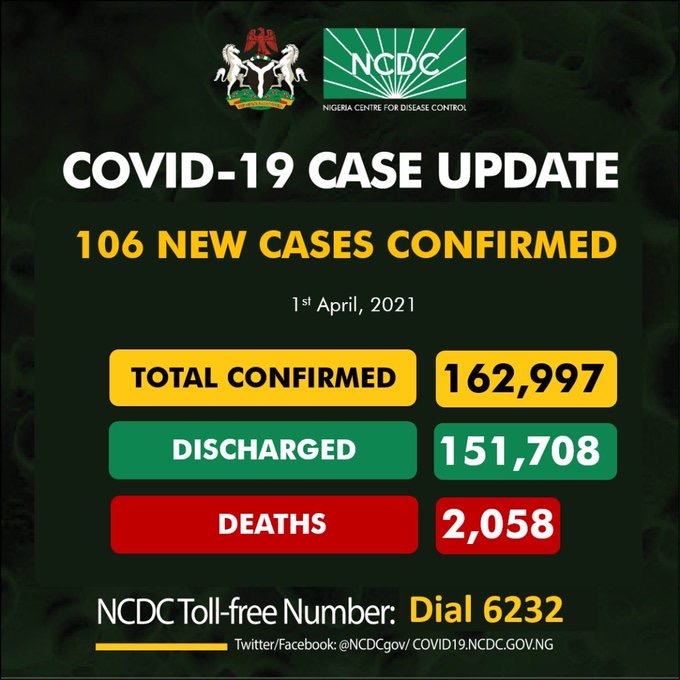 Nigeria Centre for Disease Control (NCDC) on Thursday recorded 106 new COVID-19 cases in 12 states, raising the total number of infections in the country to 162,997.

Lagos had the highest figure with 33 new cases on Thursday followed by FCT and Cross River with 20 and 11 new cases respectively.

According to NCDC, a total of 151,708 people have recovered after treatment while about 10,000 infections are still active in the country.

Nigeria also recorded one death from COVID-19 on Thursday, according to the NCDC.

With a single fatality, the total deaths in the country was raised to 2,058.

Today’s death is from a backlog of data from Rivers State.

A breakdown of cases by state can be found via https://t.co/zQrpNeOfet pic.twitter.com/b3As2HiuHA

COVID-19 vaccination has commenced in all states across the country except for Kogi state which is yet to receive doses for the vaccines.

Kogi, which has reported only five cases since the onset of the pandemic, was not supplied with doses of the vaccines due to lack of storage facility which officials say is being addressed.

48 Dead, Many Injured As Taiwan Train Derails In Tunnel (Photos)