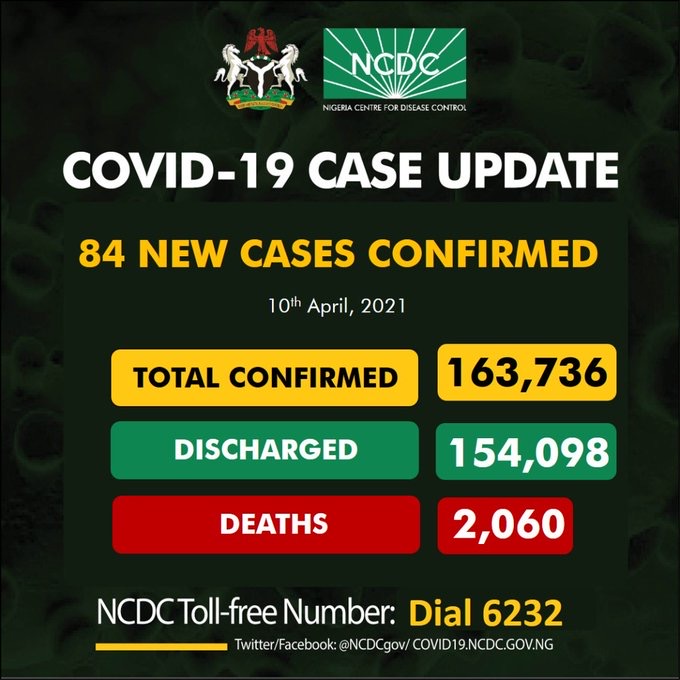 Nigeria on Saturday recorded 84 new COVID-19 infections and a single fatality from the disease, according to health authorities.

With one death on Saturday, the total deaths from the disease in the country rose to 2,060, according to an update published by Nigeria Centre for Disease Control (NCDC).

The 83 new infections from 13 states are slightly higher than the 71 cases reported a day earlier.

The new figure raised the total number of infections in the West African nation to 163,736.

Again, Lagos led on Saturday with 26 new cases to extend its lead as the most impacted by COVID-19 in the country.

In the past one week, there has been a further decline in new cases as daily infections have fallen below 200. Daily infections averaged over 1,000 between December 2020 and February 2021, during the peak of the pandemic.

Nearly 58,000 infections have been recorded in Lagos, about one third of the country’s total. One-quarter of the total deaths from the disease were reported from the commercial city.

More than two-thirds of the over 163,000 people infected by COVID-19 in Nigeria have recovered after treatment.

According to NCDC, over 154,098 patients have recovered after treatment.

A breakdown of cases by state can be found via https://t.co/zQrpNeOfet#TakeResponsibility pic.twitter.com/xBucEBXbdV