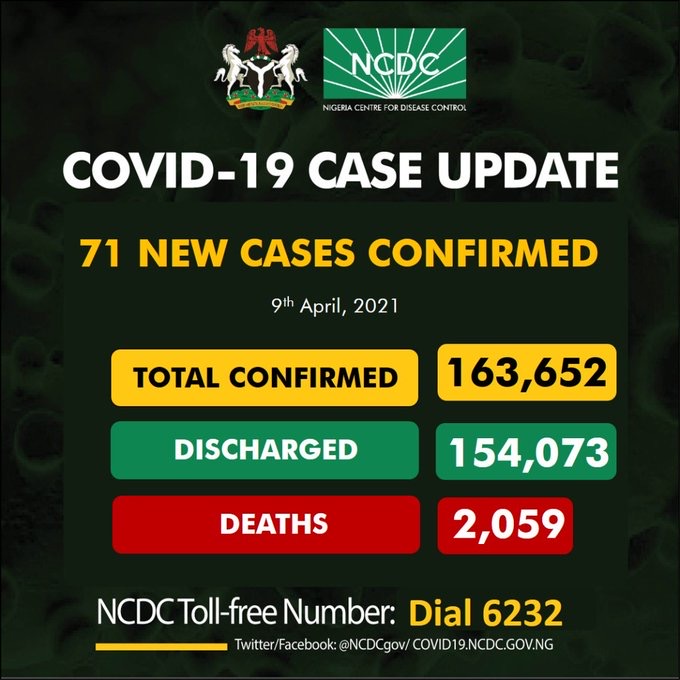 Nigeria has recorded one new death from COVID-19 — after six consecutive days of recording no deaths.

The country’s Centre for Disease Control (NCDC) confirmed this in its update for April 9, 2021 shared on Twitter.

Before Friday’s fatality was recorded, no death had been reported in the country in the previous seven consecutive days for the first time since a businessman named Suleiman Achimugu became the first fatality on March 23, 2020.

The new death brings the total number of COVID-19 death toll in the country to 2,059.

NCDC also said 71 persons were infected with the virus in nine states and the federal capital territory (FCT) on Friday.

However, 68 persons were discharged on Friday after recovering from the infection.

A breakdown of cases by state can be found via https://t.co/zQrpNeOfet pic.twitter.com/Tk4TGVlTqW

Nigeria is the country with the least death toll among the top six countries affected by COVID-19 in Africa – South Africa, Tunisia, Ethiopia, Morocco, and Egypt.

Health experts, however, believe the death toll is likely underreported due to poor testing in the country.

In the past one week, there has been a further decline in new cases as daily infections have fallen below 200. Daily infections averaged over 1,000 between December 2020 and February 2021, during the peak of the pandemic.

Nigeria commenced COVID-19 vaccination on March 5 having received 3.94 million doses of the Oxford-AstraZeneca vaccines through COVAX, a UN-backed effort that promises access to free vaccines for up to 20 per cent of participating countries’ population.

About a month later, less than a million citizens have received a jab, indicating a slow start to the process.

As at April 6, 964,387 Nigerians in 35 states and the FCT have received their first doses, according to NPHCDA – the agency responsible for the vaccination rollout.

The government has also asked states to halt new vaccinations once they go beyond half of the vaccines they were given by the federal government. This is to ensure that all those who received their first dose of the vaccine get their second dose from the limited supply of the vaccine available in the country. Nigeria has received only about 4.3 million doses of vaccine.

To achieve herd immunity against COVID-19, Nigeria had set an ambitious goal of vaccinating 40 per cent of its population before the end of 2021, and 70 per cent by the end of 2022.