Nigeria Records No Death From COVID-19 In One Week 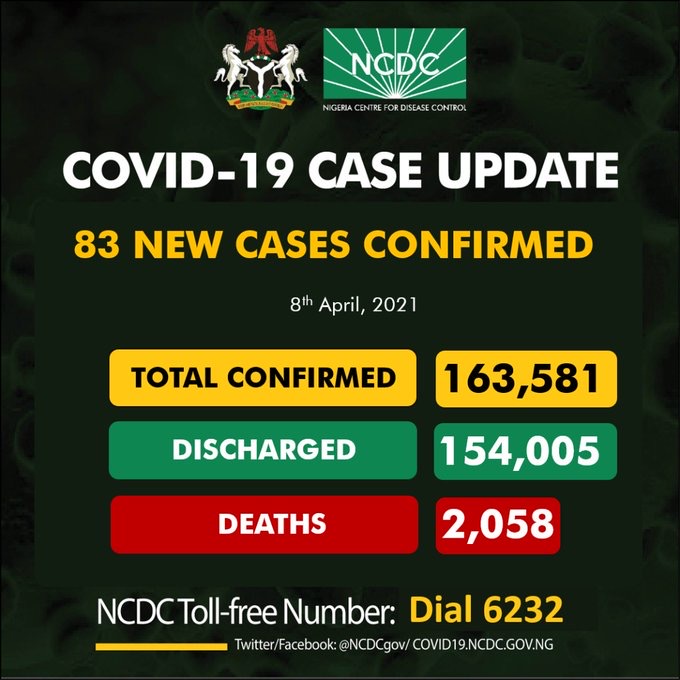 Nigeria has reached a milestone in its COVID-19 response with no death recorded from the highly infectious disease in one week – the first time since Suleiman Achimugu became the first fatality on March 23, 2020.

Suleiman Achimugu, who was a former managing director of the Petroleum Products Marketing Company (PPMC), died after returning from the United Kingdom.

The total number of deaths from the disease has remained 2,058. The last time Nigeria recorded any fatality from COVID-19 was last week Thursday.

The new update is according to an update published by the Nigeria Centre for Disease Control (NCDC) on Thursday night.

Again, Lagos led on Thursday with 22 new cases to extend its lead as the most impacted by COVID-19 in the country.

A total of 57,878 infections have been recorded in Lagos, about one third of the country’s total. A quarter of the total deaths from the disease were reported from the commercial city.

Some of those challenges which include poor testing and shortages in oxygen supply.

Health experts believe the death toll, like the number of those infected, is likely higher, with Nigeria testing less than one per cent of its 200 million population.

Also on Thursday, in continuation of a steady run of low figures, Nigeria reported 83 new infections in 14 states, according to NCDC.

The figure, which is slightly lower than 110 cases found a day earlier, raised the total number of infections in the West African nation to 163,581.

In the past one week, there has been a decline in new cases as daily infections have fallen below 200. Daily infections averaged over 1,000 between December 2020 and February 2021, during the peak of the pandemic.

✅The cumulative confirmed cases reported on 7th April, 2021 did not include data for 6th April, 2021
✅38 discharged cases previously recorded in Bauchi State was erroneously reported

A breakdown of cases by state can be found via https://t.co/xe3MrObp7w pic.twitter.com/qLHZv8FcIZ