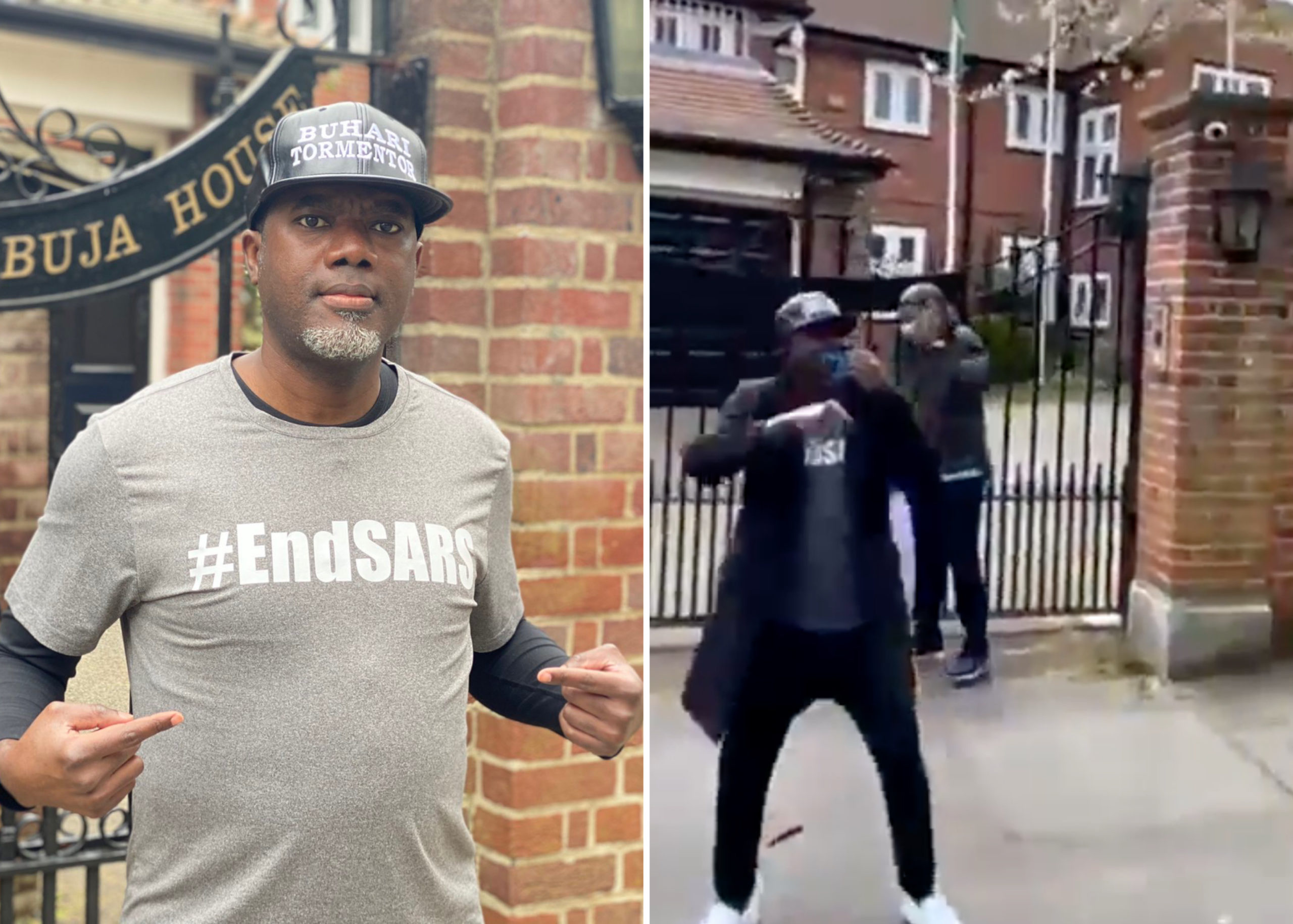 Reno Omokri, former aide to ex-President Goodluck Jonathan, has on Friday led a group of Nigerians in the United Kingdom to protest against President Muhammadu Buhari, who is currently on a medical trip in London.

The President is in London where he would be spending two weeks to enable him to undergo a medical checkup.
Read Also: Buhari Departs Nigeria For Routine Medical Check-Up In London
To express their displeasure at the medical trip, Omokri and a group of protesters decided to protest at the gate of Nigeria House showcasing placards with different inscriptions.
In a video shared on his verified Twitter handle, Omokri said the protesters assembled with a mission “to chase the president back home.”

He lamented the inadequacies of Nigeria’s health sector and also criticised the president over the Lekki shooting during the #EndSARS protest in Lagos state.

The former presidential aide questioned the decision of the President to have himself treated in London after reportedly failing to build a single hospital in Nigeria.

He left Nigeria on the day that doctors began their strike. He’s not building hospitals for people, yet he comes here to enjoy the best in a country that has law and order. Why can’t he do that in his country?.

His children all schooled here in England. He has not built a single school for Nigerians. If they are sick, they all come here.

Omokri also lamented the insecurity in the country and the hardship Nigerians are going through due to the economy under the Buhari-regime.

He criticised President Buhari over the rehabilitation of repentant Boko Haram insurgents.

Similarly, Omoyele Sowore, convener of the #RevolutionNow Movement, posted a video of a man holding a placard that reads “Buhari must go! #OccupyNigeria”.

The man, who wore a #RevolutionNow beret, said;

Buhari go home! We are outside here in Abuja house. Nigerians are calling on Buhari to go home.

Our people are suffering while you come to the UK and enjoy the benefits of taxpayers that you did not look after. Buhari, go home.

Buhari has embarked on several trips to the UK to seek medical care since he assumed office.

In 2019, the president had lamented that Nigeria was losing about N400 billion to medical tourism annually, according to TheCable

He later said frequent medical trips abroad must stop because they are not beneficial to the country.

However despite this, on Tuesday, the president departed Nigeria for London for a medical check-up and the trip is expected to last for two weeks.

Watch some videos from the protest below;

The Police Came But The #HarassBuhariOutOfLondon Went On. A Frightened @MBuhari Refused To Come Out pic.twitter.com/52NAEfFf0T

Watch Me Lay Out The Justification For The #HarassBuhariOutOfLondon Before @MBuhari’s People Called The Police On Us pic.twitter.com/XhvLLFXysj

Being Interviewed By The London Police @MBuhari’s People Called on Me In A Failed Attempt At Stopping #HarassBuhariOutOfLondon pic.twitter.com/P5NvkHMqJK