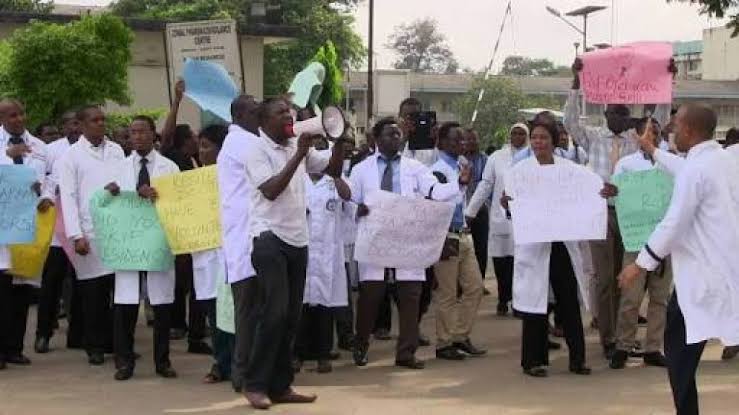 Members of Nigerian Association of Resident Doctors (NARD) have on Thursday morning announced the commencement a nationwide strike despite Federal Government’s last-minute efforts to stop the action.

The resident doctors, however, assured Nigerians that their action was not meant to hurt them.

The strike which was scheduled to begin on Thursday followed an ultimatum issued to the Federal Government which expired on Wednesday.

NARD gave the explanation in a message posted on the association’s Twitter handle, @nard_nigeria, on Thursday morning.

Nigerians must understand that we love them and the strike is not intended to hurt them but to challenge the Nigerian government @MBuhari @Fmohnigeria @LabourMinNG whose responsibilities amongst others is to care for her citizens and labour force to do the needful.

Nigerians must understand that we love them and the strike is not intended to hurt them but to challenge the Nigerian government @MBuhari @Fmohnigeria @LabourMinNG whose responsibilities amongst others is to care for her citizens and labour force to do the needful.#IstanWithNARD pic.twitter.com/GSpYGa8nR3

The union’s President, Dr Uyilawa Okhuaihesuyi, also confirmed to Channels TV that the strike had commenced by 8am on Thursday.

Meanwhile, ahead of the planned strike, the Minister of Labour and Employment, Doctor Chris Ngige, a conciliatory meeting with the leaders of the union on Wednesday in Abuja.

At the meeting which lasted several hours, he appealed to the aggrieved medical practitioners to have a rethink and sheathe their sword, saying the Federal Government was making efforts to ensure their demands were met.

Giving an update on the meeting, Okhuaihesuyi who led other leaders of the union to the discussion said they were not strange to the government’s proposal.

He stressed the need for the government to take more responsibility, adding that the decision to go on strike was for the benefit of all healthcare workers in the country.

In their demands, the doctors had called for the immediate payment of all salaries owed to all house officers, including March salaries (regardless of quota system) before the end of business on March 31.

They also demanded the immediate payment of all salary arrears, including March salaries for members in all Federal (GIFMIS platform) and State Tertiary Health Institutions across the country, especially ASUTH, IMSUTH, and UNIMEDTH.

NARD sought an upward review of the current hazard allowance to 50 per cent of consolidated basic salaries of all health workers and payment of the outstanding COVID-19 inducement allowance, especially in state-owned-tertiary Institutions.

They called for the abolishment of the exorbitant bench fees being paid by their members on outside postings in all training institutions across the country with immediate effect.

According to the doctors, salary shortfalls of 2014, 2015, and 2016 should be paid to their members in all federal institutions, including state-owned institutions as earlier agreed with the government.

They asked for the payment of death in service insurance for all health workers who died as a result of COVID-19 infection or other infectious diseases in the country.

Other demands, made at the meeting of the National Executive Council of the union held on Saturday last week at National Hospital in Abuja, reads;

Universal domestication/implementation of the 2017 MRTA by all Federal Government and State-owned Training Institutions to ensure proper funding of Residency Training in the country as stipulated by the Act.

Immediate payment of 2019, the balance of 2020 and 2021 Medical Residency Training Funds (MRTF) to our members including those under state government employ.

Immediate implementation of September 2017 Memorandum of Terms of Settlement (MOTOS) between NARD and the Federal Government of Nigeria in order to bring lasting peace to the health sector and curb the ongoing ugly trend of brain drain from the health sector.

Immediate review of the Act regulating Postgraduate Medical Training in Nigeria in line with International Best Practices to remove the unnecessary rigors in Residency Training in Nigeria, one of the factors attributed to brain drain in the health sector.

Immediate commencement of employment into all Government-owned hospitals to improve service delivery to Nigerians, enhance Residency Training, and curb the attendant brain drain in the health sector.

It also demanded the reintroduction of medical super salary structure and specialist allowance for all Doctors as already approved for some other health workers. This will go a long way in ensuring peace in the health sector.

Finally, NARD reiterated her commitment to the smooth running of all tertiary institutions in the country and the provision of specialist healthcare to Nigerians but urge the Federal Government to urgently meet the above demands in order to avert this avoidable industrial action.

Breaking: Courts To Reopen On Monday As Judicial Workers…