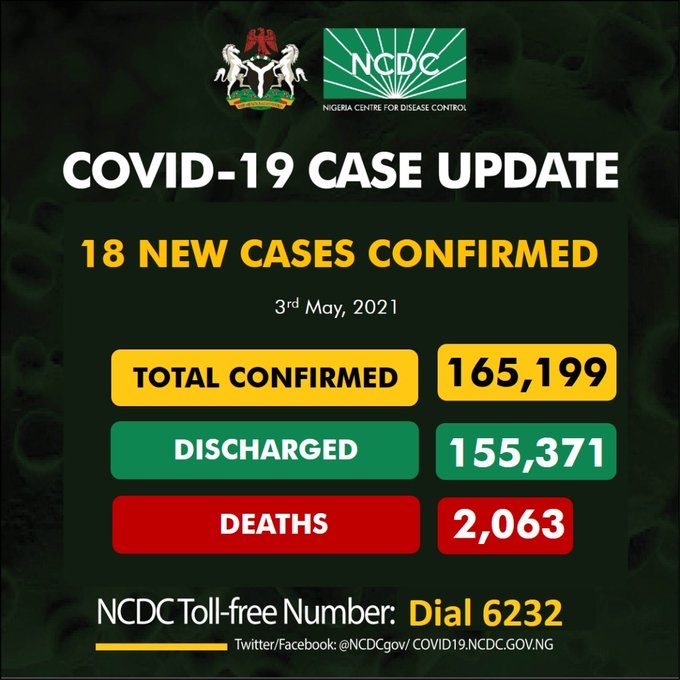 The new figure raised the total number of infections in the country to 165,199, an update published on NCDC’s Twitter page on  Monday night.

According to the update, no new death was recorded from the virus which has already claimed 2,063 lives in the country, making it the fifth consecutive day that nobody died from the disease in the country.

A breakdown of the latest data shows that 10 people were discharged on Monday after testing negative for the virus, bringing the total number of discharged persons after treatment to 155,371.

Our discharges today includes 2 community recoveries in FCT managed in line with guidelines.

A breakdown of cases by state can be found via https://t.co/zQrpNeOfet pic.twitter.com/ArIFPQhboc

Meanwhile, over 7,000 infections are still active in the country, according to NCDC.

Since the pandemic broke out in Nigeria in February 2020, the country has carried out 1,939,165 million tests, the agency said.

Almost two months after the country commenced vaccination against the virus, over 1.2 million people have received their first dose of the vaccines, according to data by National Primary Health Care Development Agency (NPHCDA).

While Nigeria continues to experience low COVID-19 figures, the country is also taking steps to prevent imported cases from countries battling with a resurgence of COVID-19 cases.

On Sunday, Nigeria announced a ban on travels from Brazil, India and Turkey, countries currently battling with COVID-19 resurgence.

World Health Organisation (WHO) on Monday said there have been more COVID-19 cases reported globally in the last two weeks than during the first six months of the pandemic.

It said more than half of last week’s COVID-19 cases were reported in India and Brazil.