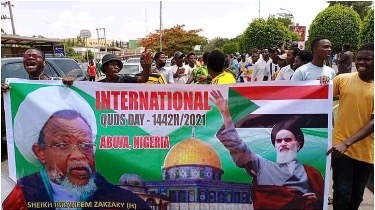 FCT Police Command has confirmed the death of a policeman during the violent protest by Islamic Movement of Nigeria (IMN), better known as Shiites in Abuja.

The spokesperson noted that the Police were able to disperse the members after hours of riots.

The protest was in solidarity with the people of Palestine who were allegedly terrorised by the Israeli government with support from the USA.

The protesters, in their number, gathered at Wuse market, chanting anti-US songs to mark the last Friday of Ramadan as Quds Day.

The protest was disrupted with the arrival of anti-riot policemen at the market where many female protesters were arrested and clamped inside the bus that conveyed them to the location.

Those arrested were beaten up and whisked away by the police with their hijabs removed. They were later at Eagle Square, according to SaharaReporters.

As the attack on their members continued, the angry protesters set ablaze the national flags of the two countries to show their disagreement with the continued occupation of Palestine. 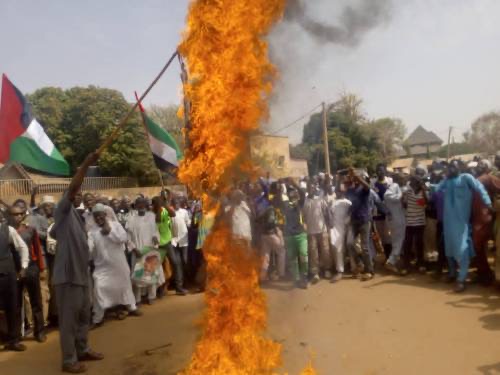 The incident led to confusion in the market as traders and passersby scampered for safety while motorists were forced to divert their routes.

They used dangerous weapons such as clubs, cutlasses and sharp knives, the Police said.

ASP Adama Ezekiel deployed to restore calm during the violent protest paid the supreme price as a result of the brutal attack where he was stabbed by one of the irate protesters.

The Police arrested 49 members of the sect and have vowed to arraign them in court after conclusion of investigation.

On his part, Commissioner of Police, Bala Ciroma, has condoled with the family of the deceased officer.

Ciroma stated that the FCT Command will not condone further attacks on its personnel, equipment or other public property.

Meanwhile, Secretary of the Academic Forum of the movement, Abdullahi Musa, in an interview with SaharaReporters, said the burning of the flags was a yearly ritual by Shi’ites worldwide on the last Friday of the Muslim month of Ramadan as instructed by the leader of Islamic Revolution in Iran, late Sheikh Khomeini.

Today is last the Friday of Ramadan and we burnt the flags in solidarity with the people of Palestine. For more than a decade, there has been an international convention that defined apartheid as a crime committed when officials systematically oppress one group in the territory under their control, and subject it to inhumane acts, with the intent to maintain the domination over that group for the benefit of another group.

‘No Record Of Such Incident’ – Police Denies Shooting…