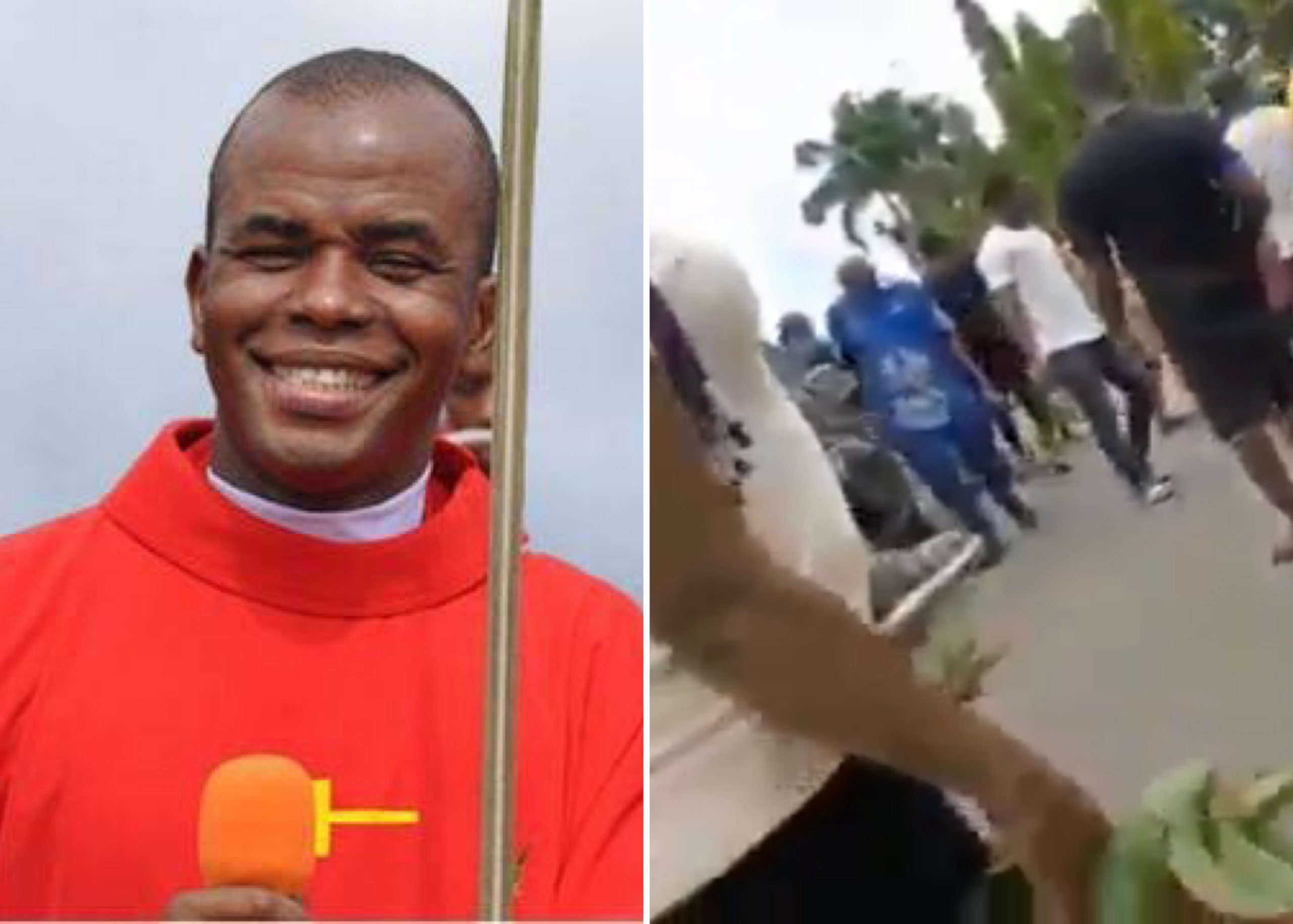 Church members of popular Catholic priest, Rev. Fr. Ejike Mbaka, have on Wednesday taken to the streets in protest about the alleged unknown whereabouts of the priest.

MDB earlier reported that Ohanaeze Ndigbo Youth Council Worldwide (OYC) raised the alarm over the alleged disappearance of the clergyman.

Mbaka has been in the news of late following his call for the resignation or impeachment of President Muhammadu Buhari over insecurity.

The Presidency, in reaction, slammed him, revealing that the cleric, who was an ardent supporter of the President, was attacking Buhari because he was refused a contract.

The clergyman then admitted that indeed he led three contractors to see the Presidency but stated that it was towards to process of ensuring security of lives and properties in Nigeria.

Read Also: Father Mbaka Admits He Led Contractors To Met Buhari, Says It Was To Proffer Solution To Insecurity In Nigeria

However, in latest development according to OYC, the whereabout of the priest was unknown, sparking protest in the coal city.

According to DailyPost, a notice calling on all youths of Adoration Ministry, Enugu state to converge at adoration ground was sent, which reads;

Good morning friends and well-wishers. Please if you know you stand for justice and you do not want the lone voice that speaks for the poor in this country to be silenced, gather at Adoration ground let’s go for a protest at the Bishops court.

Fr. Mbaka is nowhere to be found. He went yesterday to answer the Bishop’s call and up till now, he’s not taking his calls. Let’s gather! SSG.

The Parishioners have now stormed the Bishop’s Court demanding that Bishop Calistus Onaga of the Catholic Diocese of Enugu should produce him.

The news about his alleged disappearance was first reported by Ohanaeze Youth Congress, who gave Federal Government 48 hours to ”produce” the Enugu-based Catholic priest.

President-General of OYC, Mazi Okwu Nnabuike in a statement made available to Tribune on Wednesday May 5 said Mbaka was last seen on Tuesday May 4, and that efforts to locate him had failed.

We have it on good authority that his aides have neither seen nor heard from him since Tuesday. Calls put to his mobile line have also remained unanswered; this has now prompted us to issue this alarm as we would not take it lightly should anything untoward happens to him.

We are giving the Federal Government 48 hours to produce the priest, else they should be ready to face Igbo youths. They were dining and wining with him all along and now that he told the truth, they are no longer comfortable with him. Let nothing happen to Rev. Fr. Ejike Mbaka. It will not be in anybody’s interest.

They insisted that Bishop Onaga should provide him before they leave the court, claiming that the last call Mbaka received was a summon by Bishop Onaga.

See some videos from the protest scene below;

Serious Protests Erupts in Enugu as Fr Mbaka is nowhere to be Found according to members of the Adoration Ministry Enugu Nigeria
(AMEN). pic.twitter.com/PUQGUUGpHV