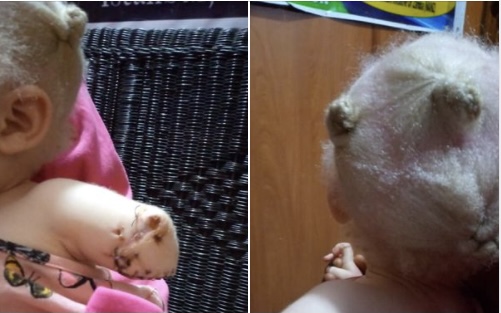 Albinism Foundation of Zambia has taken to social media to demand justice for a 2-year-old girl living with albinism whose hand was chopped off by albino hunters who believe they possess spiritual powers.

According to healthline, albinism is a rare group of genetic disorders that cause the skin, hair, or eyes to have little or no color. It is a genetic condition that results in the absence of melanin, a pigment which is responsible for giving color to the eyes, skin and hair.  The lack of melanin means that people living with albinism are more susceptible to specific health conditions, especially skin cancers. Most of them also wear sunglasses and hats to help them see clearly during the day.

However, in certain African countries, people living with albinism are forced to tread carefully as they are regularly hunted and killed while their body parts are used for rituals.

According to Deutsche Welle, at least ten albinos are murdered in ritual killings every year in Zambia. Some believe albino body parts bring wealth or luck. Those born with the genetic condition are calling for an end to this madness.

There are more than 25,000 people living with albinism in Zambia. Cases of albino killings are rarer here compared with other African countries, such as neighboring Tanzania. According to the Red Cross, witchdoctors in Tanzania are willing to pay up to $75,000 (70,000 euros) for a complete set of albino body parts.

Unfortunately, 2-year-old Jamimah from Zambia recently became a victim of these albino hunters.

Her mother narrated the incident to the foundation which was shared via its Facebook  page on Tuesday, June 9. 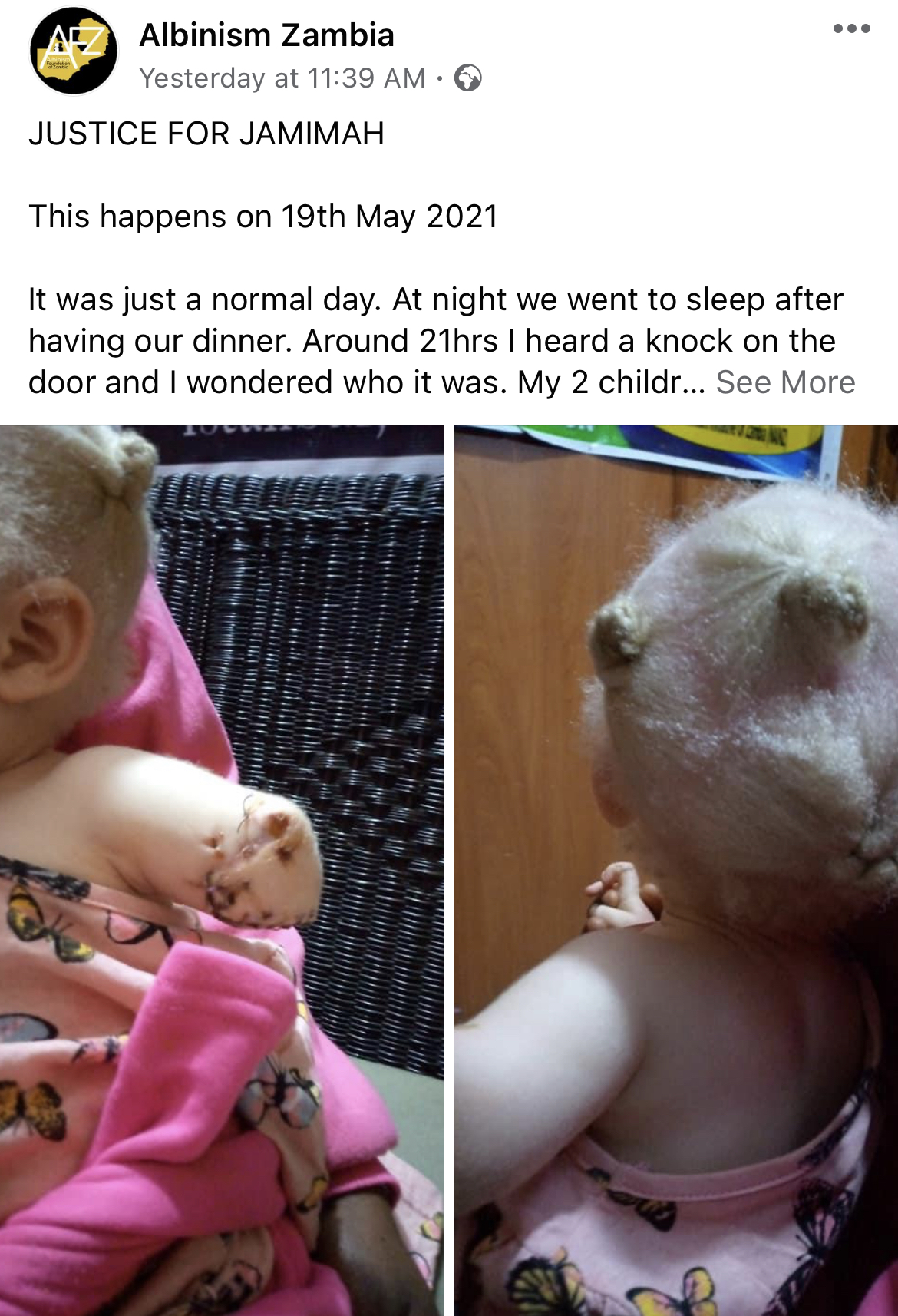 She recounted how her daughter was attacked at their home in the middle of the night by 3 men claiming to be police officers.

The distraught mother revealed that the incident happened on May 19 when some men claiming to be police officers knocked on her door around 9:00pm (21:00 hrs) with her mother and two children sleeping.

It was just a normal day. At night we went to sleep after having our dinner. Around 21hrs I heard a knock on the door and I wondered who it was. My 2 children were fast asleep and my mother who came to sleep over was also sleeping

‘Who is it?’ I asked as the knock persisted. ‘Open the door, this is Zambia police, we are searching for drugs’ male voices answered outside the door.

Coming from sleep I became confused and continued wondering what was going on. ‘We don’t have drugs here’ I shouted back. ‘Open the door before we break it,’ the voices became aggressive. I slowly walked to the door and passed my mother who was sleeping at the living room.

The woman added that the men told her: “Open the door, this is Police, we are on duty”, adding that she opened the door only to find the men not wearing police uniforms. 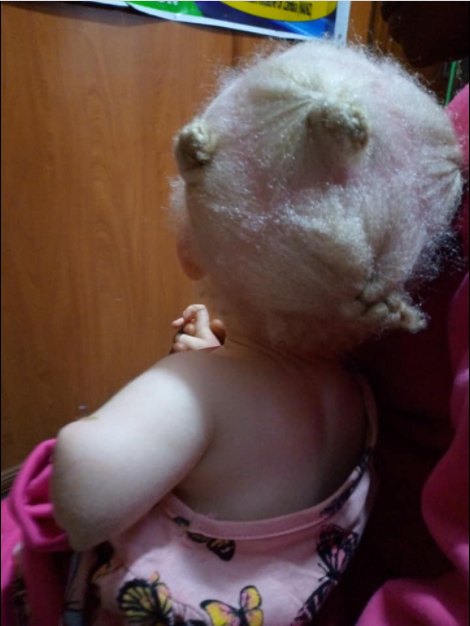 The mother of two said;

I opened the door then suddenly saw 3 men dressed in black coats with hats and masks on their faces. They had guns and one pointed a gun at me.

‘If you scream we will shoot you’ he said as he dragged me outside the house. The 2 men entered the house. In my mind I thought that maybe they were real policemen on duty and my conscience was clear as I knew that no one uses drugs at our place. But still another thought came as I wondered why they were not in uniform. Who are these people? I asked myself.

Behind the house the man started asking me questions while holding my hand and still pointing a gun on me.

As I was responding to his questions suddenly I heard my 2nd child scream and shortly after my older son shouted, ‘Mommy, they’re cutting the hand of my sister’. At this point I got the whole picture and understood what was happening.

My 2nd child was born with Albinism and I have heard of how people are after their body parts. I just couldn’t believe it was happening to my 2 years old daughter. I started shouting for help and struggled with the man who was holding me. Sadly no one came out to our rescue. My kids were screaming inside and I was shouting for help outside. My mother was hopeless as one man had his gun on her.

I rushed inside and found my daughter in blood. Her left hand was cut. I was hopeless and didn’t know what to do. My mother helped to cloth her as I rushed out to find people who can take us to the clinic.

We reached the clinic around 05hrs and my daughter was admitted at Mbala hospital. During the 2 weeks I was in hospital with her. I informed her father and other relatives although I didn’t received much support from them.

The mum says her ex-husband left her because their daughter was born with albinism and she’s had to raise her kids alone while her ex-husband has remarried.

Once upon a time I was happily married in Lusaka but life changed when I gave birth to my 2nd baby girl.

Her father rejected her because she was born with Albinism so he divorced me and that’s how and why I went to live with my mother in the village. Before I left church people and relatives tried their best to convince my husband that it’s possible for us to have a child with Albinism but to no avail. I just had to go.

She explained that her daughter suffers pains and lost a lot of blood after the attack but is now stable.

The mother added that her older child “is even more affected by the attack”, saying;

‘Mummy where have they taken the hand of my sister?’ He asks me. He saw them chop off her hand and I think this has affected him mentally.

The woman expressed that she hopes the criminals who attacked her daughter will be caught, saying;

I have no kind words for the criminals who attacked my daughter and I pray for their arrest and prosecution.

Human Rights Commission of Zambia has admitted that more needs to be done to address human rights violations against people living with albinism.

Meanwhile, Albino Foundation of Zambia (AFZ) has been campaigning for the equal treatment of people living with albinism and for an end to the misconception that their bodies could be used to gain wealth.

Twitter Suspension: FG Should Have Sued, Not Place A Ban – Femi Falana