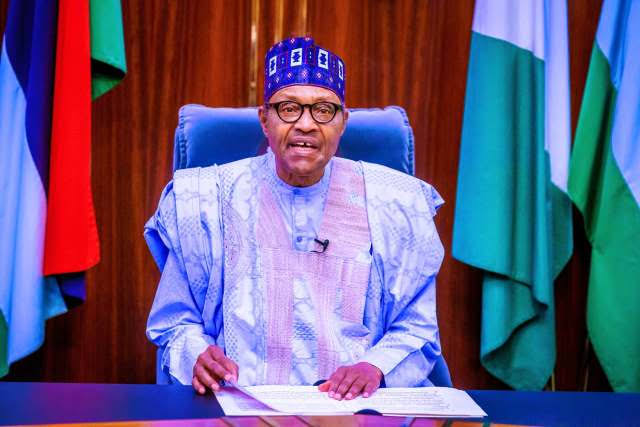 President Muhammadu Buhari has blamed last year’s historic #EndSARS protests and youths for scaring investors away from the country.

It would be recalled that hundreds of Nigerians especially youths took to the streets last October to peacefully demonstrate against decades of police brutality and a country with better security.

However, a crackdown by thugs and security operatives led to the death and injury of dozens of protesters, while a post-riot by hoodlums led to the breakdown of law and order across the country, leading to the loss of more lives and massive destruction of property.

The government said 57 civilians, 37 police officers, and six soldiers were killed as a result of the troubles that surrounded the protests.

Meanwhile, the number of deceased protesters at Lekki tollgate following the invasion of soldiers as well as other parts of the country during the protest is yet to be confirmed due to conflicting figures and denial by state and federal governments.

However, in an interview with Arise TV which aired on Thursday, June 10, 2021, President Buhari said the protests made the country insecure and scared away investors.

The President said this when asked about how he hoped to expand on Nigeria’s limited economic growth and make the country competitive and attractive for investors.

Nothing will invest in an insecure environment? So I told them to tell the youths if they want jobs, they should behave themselves and make sure Nigeria secure, so that people can come and invest.

Nigerian is resourceful and people know it. We are expatriate, God has endowed us but nobody can bring investment. Like 200 buses bought by the former governor of Lagos, some of these boys burned the vehicles. The Governor [Babajide Sanwo-Olu] made an album and brought it here. I took the album and put it aside…Who will come and invest money in an unsecured environment? Nobody will, it’s just common sense. So behave yourself and make Nigeria secure.

The problem of poor economy had been a concern long before last year’s demonstrations, and had been squarely blamed on the president’s erratic economic policies.

Under the 78-year-old, Nigeria’s unemployment rate has skyrocketed to a record 33.3%, and the nation is adjudged the poverty capital of the world with almost half of its estimated 200 million population living in extreme poverty.

Watch a short video of the interview below;

“They should tell the youth that if they want jobs, they will behave themselves” – President Buhari pic.twitter.com/6rAPHyAvXx