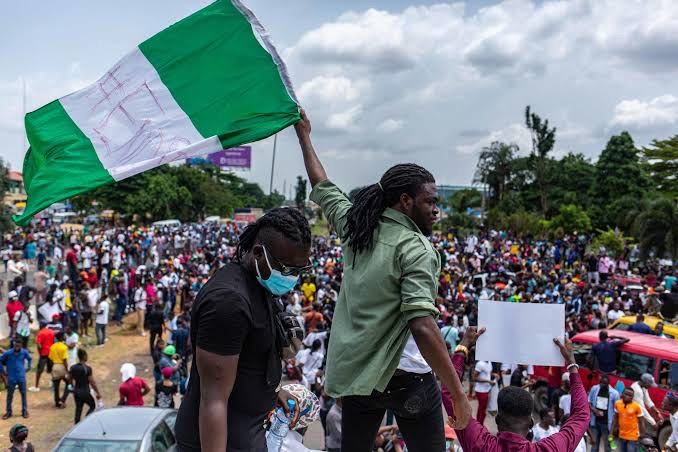 Nigerians have reacted with fury after the federal government on Friday announced a ban on Twitter, the microblogging platform millions of citizens have used for years to express themselves and hold the authorities to account.

The suspension is a culmination of a three-day drama which began when Twitter deleted a tweet by President Muhammadu Buhari for violating its rules.

In the post, Buhari referenced his role in 1967 Nigerian civil war where over a million people were gruesomely killed, threatening to treat Nigerians “misbehaving” in “the language they understand”.

Although he did not name the South East, it was in clear reference to the region where government installations have been torched in recent weeks, and which suffered the brunt of the civil war the most.

Buhari’s statement drew widespread condemnation, and prompted a deletion from Twitter after several complaints were filed by citizens, saying the post breached its rules.

After the news broke, several Nigerians including some celebrities took to social media and other platforms to blast the government over its decision.

The lawyer and activist, Femi Falana, in an interview with PremiumTimes said the suspension was a “provocative infringement” of Nigerians’ right to freedom of expression including freedom to access information in the country.

The NBC has been authorised to impose harsh fines on local media houses that embarrass the federal government as a prelude for possible ban.

The suspension of Twitter may soon be extended to Facebook, Instagram and then BBC, VOA, Aljazeera, SABC and other international media platforms accused of publishing seditious or defamatory information against the government and its officials.

Some Nigerians believed the government lacks the technological capacity to implement the ban.

They can’t stop kidnapping, armed robbery and terrorism… the country is as unsafe as ever… yet they can seize passports and block bank accounts of peaceful protesters. They ban cryptocurrency. They ban Twitter. Completely out of touch with the plight of young people.

Must we kikiki about everything??
This Twitter in Nigeria ban is not funny! Federal Government does not rate us! Because what is THIS!!!

You announce the suspension of twitter….ON TWITTER!🤦‍♀️
You can’t make this stuff up

The suspension of the activities of @Twitter in Nigeria by the @MBuhari administration should be ignored by @Jack. The Buhari government has no means to effect the suspension, and even members of the administration are still on Twitter#TwitterSuspendBuharisAccount#TableShaker

Lmaoo this administration is so fucking dumb. You want to ban Twitter in Nigeria but some of the cabinet still get their twitter accounts active 🤣🤣🤣#TwitterSuspendBuharisAccount

Jack go soon take action and dis street won’t be able to contain the happiness, if this actually happens today#TwitterSuspendBuharisAccount

How can a bag of Rice be more than Minimum wage??? and to suspend Nigerians from using Twitter in Nigeria is their top most priority. #TwitterSuspendBuharisAccount VPNs pic.twitter.com/kg1XUkpNOr

At this point I’m safe to say this is the worse government in the history of Nigeria🤦🏾‍♂️how did we even reach here. Suspending Twitter in Nigeria😂🤡 #TwitterSuspendBuharisAccount pic.twitter.com/K3N73lk1RZ

Federal government ban Twitter and still the President’s account is still functional, our government is failing even in their failures. #TwitterSuspendBuharisAccount pic.twitter.com/nteDMtz3dJ

If you live in Nigeria, it makes sense to figure out a way to hide the Twitter app icon on your phone.
If @Twitter can give a camouflage app icon for this, that would be fab.

You all can now see why @twitter Africa is safely in Ghana?

Imagine this shitshow with an office in Nigeria and with Nigerian employees localized?

FG Bans Twitter in Nigeria, some of us non influencers come online to ease stress after work and have fun.

Twitter has provided jobs for some people more than Buhari did in 6years. VPN is the solution

Suspending @Twitter can’t hurt @jack but will surely hurt millions of Nigerians, (mostly the YOUTH) that are on Twitter. Nigerian public & private sectors will also be hurt.

Nigerias president, @MBuhari, has banned Twitter ‘indefinitely’ after he got caught violating their abusive behavior policy. Disappointed, to say the least. https://t.co/gDMSjxd5bv

The Nigerian police as we know will begin to intimidate and harass people for having the Twitter app on their phone. So no, it is not funny. Take precautions

The essence of Nigeria govt suspending twitter in Nigeria was to carry out their jihadist agenda. Twitter is the only means ordinary masses air their voices & raise alarm on the suppression & killings of the masses by Nigeria security forces.
EndSARS
Get VPNs
Twitter in Nigeria

Make dem even ban twitter sef. At least that Aproko Doc and Dr. Funmi no go dey tell me when to eat and when not to. pic.twitter.com/akWdhhmLJ5

But, why can’t they announce this on NTA or The Nation? Coward government, they had to announce the suspension of Twitter in Nigeria even on Twitter. Hypo what?

So, Twitter is what is giving Buhari headache? 😂 There was a country!