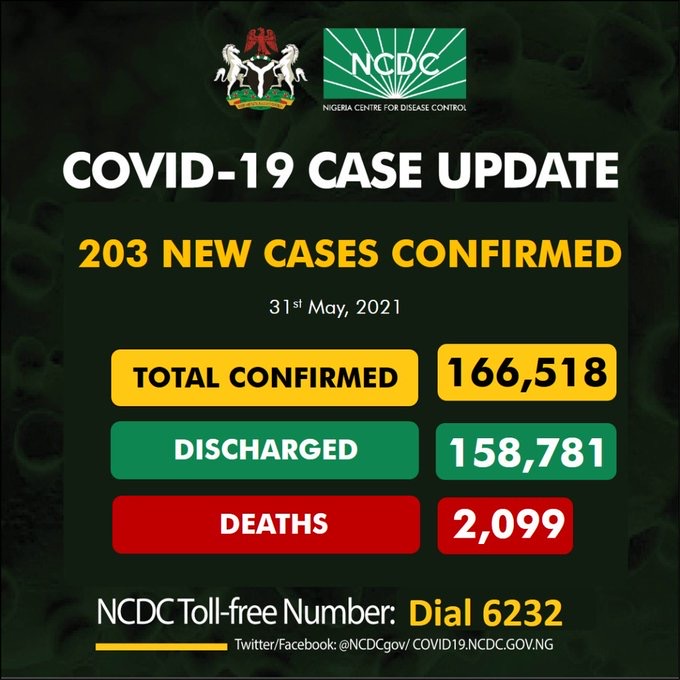 Nigeria witnessed a leap in COVID-19 cases on Monday as the country’s Centre for Disease Control (NCDC) recorded 203 infections – the highest toll in 5 months.

According to the agency’s update, the new cases were recorded in five states and Federal Capital Territory (FCT).

It said this number includes a backlog of data from Benue and Nasarawa states recorded from February to May 2021.

For the first time, Benue State led in the daily infection tally with 178 cases out of the 203 reported across five states and the Federal Capital Territory (FCT).

The disease centre noted that Lagos, which usually habitually leads the chart, only recorded 10 cases on Monday while Ondo recorded six, and both Kaduna and FCT recorded four cases each. Plateau State also makes the list with a single case.

The new fatality figure toppled the previous record of 27 deaths recorded on January 30, 2021.

Meanwhile, about two-thirds of the over 166,000 infected persons have recovered after treatment.

According to NCDC’s data, 156,781 people have been treated and discharged since the disease began spreading in the country with 2,223 persons discharged on Monday.

Until Monday, infections had reduced significantly in Nigeria with an average of less than 100 per day in nearly one month. Also, only nine deaths had been recorded in the past 54 days until the latest fatality figure.

The news of the arrival of more than 200 travellers considered as “health hazards” for evading mandatory protocol, had raised fear of a possible spike.

Health experts warned against letting the guard down on safety with many countries such as India, Brazil and Turkey entering the third wave of the pandemic.

Read Also: Violators Of COVID-19 Travel Advisory Will Be Grounded For One Year – FG

Meanwhile, more than one million tests have been conducted in Nigeria out of an estimated 200 million population.

About two million people have received, at least, their first shots of Oxford vaccines.

‘Things Are Hard. I Want To Go Back To Nigeria’ – Decomposing Body Of Nigerian Man Found In Ghana With Suicide Note