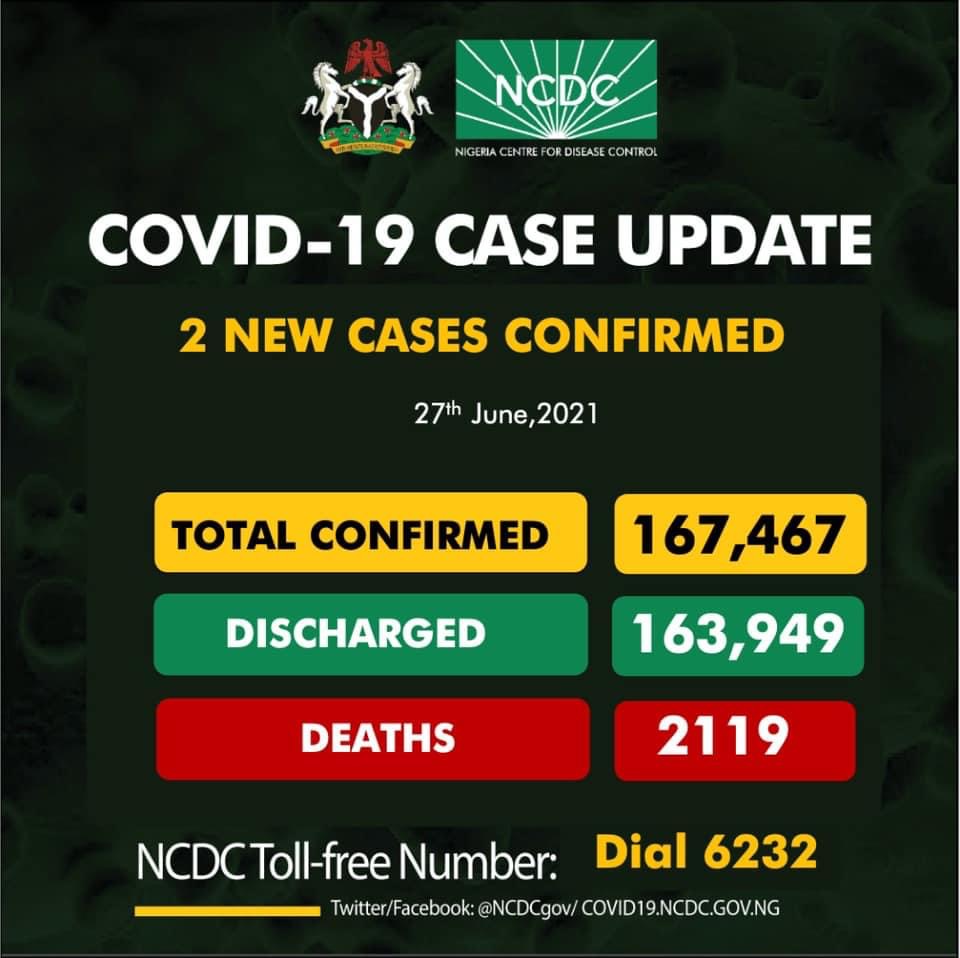 Nigeria on Sunday recorded just two coronavirus cases, exactly one week after it recorded no infection in a single day since February 2020.

The country’s Centre for Disease Control (NCDC) said in an update on its official Facebook page Monday morning that the two new cases were reported in the country’s capital, Abuja.

The new infection tally, which was a sharp drop from 35 cases recorded a day earlier, increased the country’s total tally to 167,467.

There was no new death from the disease on Sunday, keeping the total fatality toll at 2,119.

According to the NCDC data, 163,949 people have recovered after treatment. The data showed that the country’s active COVID-19 cases are now 1,399.

Nigeria has seen a sharp drop in infections and deaths since March, adding to signs that Africa’s most populous country may be out of the woods.

However, this is not the case in many other African countries that are currently at risk of a third wave of the pandemic with the resurgence of infections.

World Health Organisation (WHO) in a statement on Thursday said infections are rising at a “fast pace” in 12 African countries, with eight reporting a surge of over 30 per cent in new cases.

The global health agency attributed the spike to a combination of factors including weak observance of public health measures, increased social interaction and movements, among others.

With rapidly rising case numbers and increasing reports of serious illness, the latest surge threatens to be Africa’s worst yet.

Africa can still blunt the impact of these fast-rising infections, but the window of opportunity is closing. Everyone everywhere can do their bit by taking precautions to prevent transmission.

Health experts in Nigeria have, therefore, cautioned against letting the guard down on safety, warning that poor testing in many states could be masking the severity of the disease.

The COVID-19 upsurge comes as many African countries face acute shortages in vaccine supply, resulting in a slow vaccination drive.

At least, 18 African countries have used over 80 per cent of their COVAX vaccine supplies, with eight having exhausted their stocks, according to WHO.

The global health institution noted that 29 countries have administered over 50 per cent of their supplies.

Despite the progress, just over 1 per cent of Africa’s population has been fully vaccinated.

To achieve herd immunity against COVID-19, Nigeria had set an ambitious goal of vaccinating 40 per cent of its population before the end of 2021, and 70 per cent by the end of 2022.

The data may represent about 109 million out of the country’s roughly 200 million people.

Meanwhile, only about 3.2 million Nigerians have received their first doses of the COVID-19 infections as of June 28.