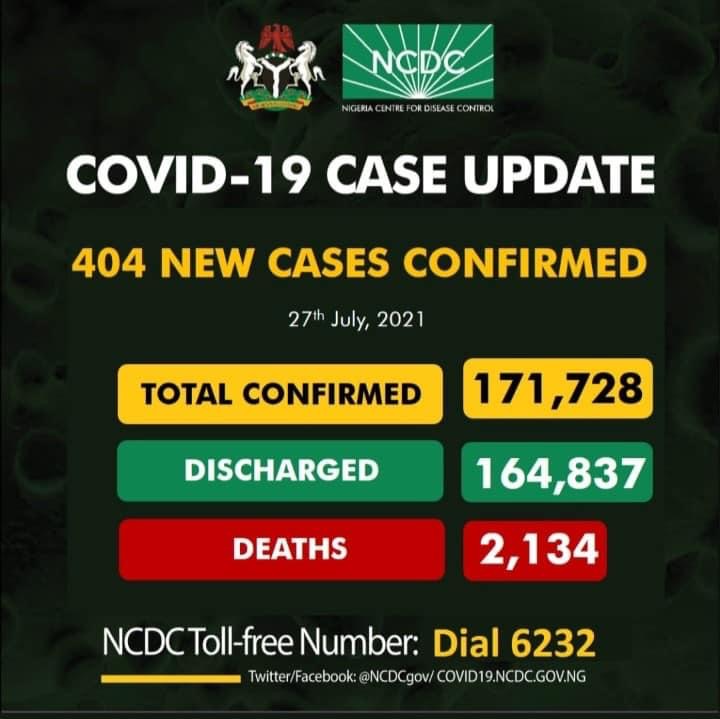 Nigeria Centre for Disease Control (NCDC) has announced that 404 additional COVID-19 infections and zero COVID-19 related deaths were registered in Nigeria on July 27, 2021.

NCDC disclosed this on its official Facebook handle on Wednesday morning, saying the additional infections represent the highest number of daily cases recorded in over four months, taking the total tally to 171,728 and 2,134 casualties.

The latest development is the highest toll recorded since March 4 when 711 cases were detected.

This came few weeks after the Government confirmed Delta COVID-19 variant in the country, the nation’s coronavirus infection has been on the rise.

Delta variant is recognised by the World Health Organisation as a variant of concern, given its increased transmissibility.

The variant has been detected in over 100 countries and is expected to spread to more countries.

The variant has also been linked to a surge in cases in countries where it is the dominant strain in circulation.

There are ongoing studies to understand the impact of the variant on existing vaccines and therapeutics.

According to available data from NCDC, a total of 4,010 cases have been registered so far in the month of July, a significant increase compared to 1,100 and 1,394 recorded in the months of June and May 2021, respectively.

Nigeria’s public health agency announced that the 404 infections were reported in 11 states.

It stated that Lagos State, which had been contributing the highest number, reported 356 in the day under review.

NCDC disclosed that 39 people have recovered and were discharged from various isolation centres in the country, but no death was recorded on Tuesday.

The public health agency added that till date, 164,837 recoveries have been recorded nationwide in 36 states and the Federal Capital Territory.

The agency assured that a multi-sectoral national Emergency Operations Centre, activated at Level 2, continues to coordinate the national response activities.

NCDC added that the country had also tested more than 2.4 million samples for the virus out of the country’s estimated 200 million population.

NCDC however advised that Nigerians must protect themselves from COVID-19, as the virus continues to spread across the country and the variants were circulating.

Stay six feet apart from others who don’t live with you. Avoid crowds and poorly ventilated indoor spaces and wash your hands often with soap and water. Use hand sanitiser if soap and water aren’t available.