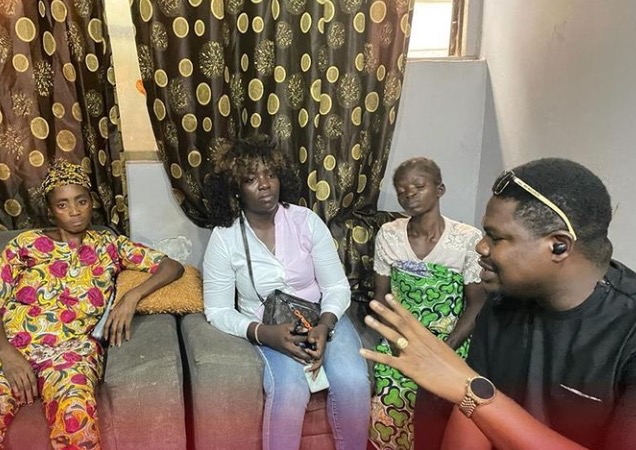 Comedian and actor, Mr Macaroni, has donated the sum of N500,000 to the family of Jumoke Oyeleke, the teenager killed during Yoruba nation rally in Lagos state.

On July 3, the police had shot into the air and fired teargas as they dispersed ‘Yoruba nation’ agitators at Gani Fawehinmi park.

Amid the violent dispersion, the 14-year-old was found dead in a pool of blood after a stray bullet from police gunshots was said to have hit her.

In an Instagram post on Saturday, Mr Macaroni said he and his team visited the family of the deceased to commiserate with them.

The entertainer added that it was unfortunate that Jumoke was killed while striving to provide for her family’s needs.

He disclosed that he met the family “grievously mourning” the teenager, adding that the donation was to support them as they grapple with the unfortunate incident.

The family are grievously mourning the death of Jumoke who was the breadwinner of the house. She worked as a sales attendant in a beverage store and used the little she earned to take care of her mother and 3 siblings.

I visited their family house with Dabira and donated N500,000 to support the family hoping that fellow Nigerians would also kindly support them as they go through this unbearable loss.

He also expressed concern that since the incident happened nobody has taken responsibility for the young lady’s death.

The entertainer called on the public to also donate to support the family — via a crowdfunding account initiated in her honour.

Before my visit, Dabira visited the place in which Jumoke and her family stayed and it is indeed not a pleasant place to live in. I plead that we do not let the family go back to living in that condition.

Also, the Government or police are yet to take any responsibility and the family have been left to saddle all the financial burdens from mortuary bills, to autopsy, to bills for case treatment and the well-being of the entire family who have been abandoned.

Please no amount is too small. Kindly donate and support the family with whatever amount you can.

The police had earlier denied the culpability of its officers in the death of the girl while the state government ordered an investigation into the matter.