Photos: Death Toll Rises To Over 126 In Germany, Belgium As Disastrous Flooding Continues

Death toll from devastating floods in Europe soared to over 126 on Friday, mostly in western Germany where emergency responders were frantically searching for over 1,300 people missing.

Rounds of heavy rainfall which began on Thursday caused rivers to burst their banks, producing disastrous flooding that washed away houses and roadways.

The death toll may continue to increase as floodwaters begin to gradually recede, as questions began to be raised about lapses in the country’s elaborate flood warning system.

Unsuspecting residents were caught completely off guard by the torrent dubbed the “flood of death” by Germany’s top-selling daily Bild.

Streets and houses were submerged by water in some areas, while cars were left overturned on soaked streets after flood waters passed. Some districts were completely cut off from the outside world. 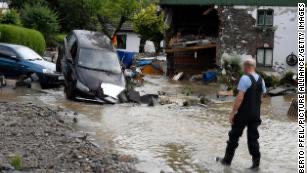 Roads buckled and washed away. Cars piled atop one another. Houses were inundated to the roof tiles. Frightened residents were being evacuated in the shovels of earth movers.

In Europe, nowhere was affected more than Germany, where hundreds were still unaccounted for and the death toll had reached 106 and was expected to rise as rescue workers combed through the debris. At least 20 were reported dead in Belgium.

A European weather agency had issued an “extreme” flood warning after detailed models showed storms that threatened to send rivers surging to levels that a German meteorologist said on Friday had not been seen in 500 or even 1,000 years.

Residents were shocked by the damage as floodwaters continued to rise overnight.

“We rushed home and found ourselves waist-deep in water. And overnight another 50 centimetres were added,” said Christoph Buecken in Eschweiler in North Rhine-Westphalia (NRW), Germany.

“I fear that we will only see the full extent of the disaster in the coming days,” Chancellor Angela Merkel said late Thursday from Washington, where she met with President Joe Biden.

My empathy and my heart go out to all of those who in this catastrophe lost their loved ones, or who are still worrying about the fate of people still missing.

Meanwhile, death toll in Belgium jumped to 23 with more than 21,000 people left without electricity in one region.

Luxembourg and the Netherlands were also hammered by heavy rains, inundating many areas and forcing thousands to be evacuated in the city of Maastricht.

German officials said Friday their warning system, which includes a network of sensors that measure river levels in real time, functioned as it was supposed to. The problem, they said, was an amount of rain they had never seen before — falling so rapidly that it engorged even small streams and rivers not normally considered threats.

Extreme downpours like the ones that occurred in Germany are among the most visible and damaging signs that the climate is changing as a result of warming caused by greenhouse gas emissions. Studies have found that they are now occurring more frequently, and scientists point to a simple reason: A warmer atmosphere can hold more moisture, which creates extreme rainfall.

In Central Europe rescue efforts were hampered, with electricity and communications networks down, roads and bridges washed out, and drinking water scarce. The worst hit were thinly populated, rural areas.

Some parts of western Europe received up to two months’ worth of rainfall in two days on soil that was already near saturation, according to World Meteorological Organization.

Meanwhile, the severe storms have put climate change back at the centre of Germany’s election campaign ahead of a September 26 poll marking the end of Merkel’s 16 years in power.

Speaking in Berlin on Friday, President Frank-Walter Steinmeier said Germany would “only be able to curb extreme weather situations if we engage in a determined fight against climate change”.

The country “must prepare much better” in future, Interior Minister Horst Seehofer said, adding that “this extreme weather is a consequence of climate change”.

Although it is still a subject of debate, some scientists say climate change might be causing storms to linger longer.

42 Dead, Dozens Missing Due To Severe Floods In Germany…