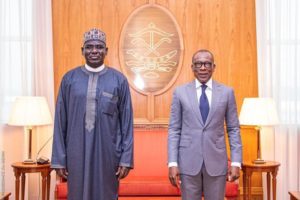 Buratai, Nigeria’s Chief of Army Staff between July 2015 and January 2021, was deployed as Nigeria’s envoy in the Benin Republic in June 2021.

He met with the Beninese President to present his letter of credence to him few months after President Muhammadu Buhari appointed him as Nigeria’s envoy to Benin Republic. 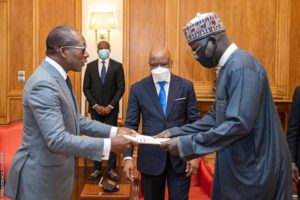 Also, the Ambassador of Germany to Benin Republic, Michael Derus; as well as those of Ghana, Gabon, and Norway also presented their letters of credence to Talon.

In a statement, Beninese Government said Talon granted audience to each of the new ambassadors and discussed with them on the revitalisation and strengthening of bilateral cooperation between these different countries and Benin.

Talon was also said to have received a brief update on the state of cooperation between Benin, Nigeria and the other countries.

Buratai met with Talon amid planned extradition of wanted Yoruba nation activist, Sunday Adeyemo, also known as Sunday Igboho, who was arrested in Cotonou on July 19, 2021 while he tried to catch a flight to Germany with his wife, Ropo.

It is not clear whether or not Buratai discussed Igboho’s extradition with the Beninese President.

A member of Igboho’s legal team, Pelumi Olajengbesi, had said Buratai asked for the extradition of Igboho to the headquarters of Department of State Services in Abuja, Nigeria but Benin Republic declined.

Igboho, an arrowhead of the secessionist agitation for Yoruba nation, was arrested after the Nigerian Government notified its West African neighbours – including Benin Republic – that he should be hunted.

He had fled the country after Department of State Services (DSS) raided his residence and subsequently declared him wanted for allegedly stockpiling arms to cause mayhem under the pretext of Yoruba nation but the activist denied the allegation.

Igboho was arrested with his wife, Ropo, but Cour De’appal De Cotonou ordered the release of the Germany-based wife of the activist, saying there were no allegations against her.

Beninese court, on Monday, however, ordered that Igboho be remanded in a prison facility in the country while further investigations were carried out on the case against the agitator.

Read Also: ‘I Fled Nigeria Because Govt Was After My Life,’ Igboho Tells Benin Court

Igboho is facing allegations bordering on trafficking in arms, inciting violence and causing disunity in Nigeria.

Some of the other offences said to have been committed by the activist include entering Benin Republic illegally as well as alleged planned intent to cause social unrest in Benin Republic.

Though currently in detention, the court granted the 48-year-old agitator access to medical care while his lawyers continue to battle for his release and kick against his extradition to Nigeria.

‘I Fled Nigeria Because Govt Was After My Life,’ Igboho Tells Benin Court

Hushpuppi Pleads Guilty To Money Laundering Charge, Faces Up To 20 Years In Prison