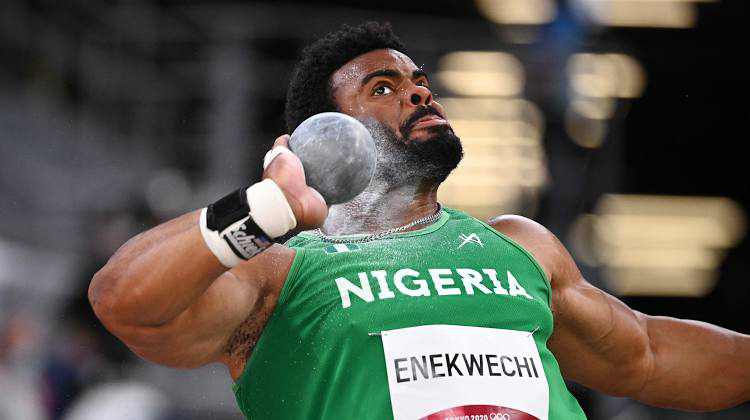 Nigeria’s Chukwuebuka Enekwechi has been denied a medal in the men’s shot put final at the ongoing Tokyo 2020 Olympics on Thursday.

The 28-year-old athlete finished 12th after he fouled in his first attempt but threw 18.87 meters in his second. Sadly, his third throw of 19.74 meters could not improve his chance of a podium finish.

Meanwhile, Ryan Crouser of the US took the gold after hitting 23.30 metres on his sixth and final effort to set a new Olympic record.

It would be recalled that Enekwechi made history on Tuesday when he became the first Nigerian to qualify for the final of the shot put event.

In the semi final game, he ranked seventh after launching his implement to a mark of 21.16m on Men’s Shot Put Qualification table, thereby securing a non-automatic qualifying spot for the final after clinching fourth position in Group B.

His loss in the shot put finals comes about a day after he revealed that he was only given one kit for the Games.

Ahead of the final, Big Chuk as he is fondly called took to his TikTok to shared a video of himself washing his kit.

“When you made the Olympic Finals but you only have one jersey,” he wrote on the video, which has caused an uproar on social media.

Meanwhile, in athletics, the hurriedly assembled team of Nigeria’s 4×100 meters clocked 43.25 seconds to finish sixth in heat 2 of the event.

The finish was far from the position and time required for a place in the race’s final.

Having qualified with the quartet of Blessing Okagbare, Grace Nwokocha, Favour Ofili and Rosemary Chukwuma, the team was without three athletes.

Okagbare was suspended from the games for failing a drug test, while Chukwuma and Ofili were among the 10 athletes not allowed to compete in Tokyo after failing to complete three out-of-competition tests.

With Nwokocha as the only available member of the original team, Ese Brume, who won a Long Jump bronze, Tobi Amusan, who missed out on a 100m hurdles medal, and Patience George Okon were hurriedly drafted as replacements.

Germany finished first, followed by Switzerland and China to complete the qualification slots.