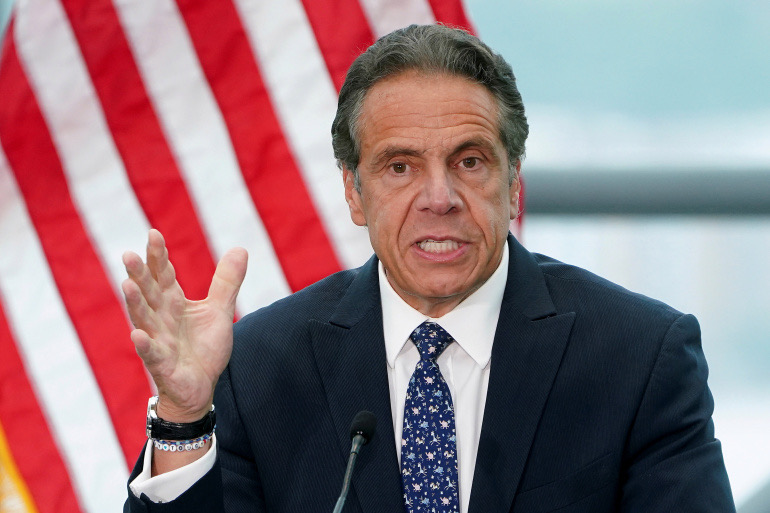 Following in the footsteps of other high-profile Democrats, Biden said ‘I think he should resign,’, after telling reporters that he stood by his previous statement that if the investigation found accusations of sexual harassment against Cuomo were credible the New York Democrat should step aside.

The president answered, ‘let’s take one thing at a time here,’ when asked if Cuomo should be impeached and removed from office.

Cuomo has refused to resign and is contesting a damning report from US Attorney General Letitia James that found he did sexually harass 11 women, claiming it omits facts and is a political attack on him despite growing calls to step down and the increasing likelihood of impeachment.

Biden remarked that some of Cuomo’s ‘embraces‘ that were ‘totally innocent’, but added that;

But apparently the attorney general decided that there were things that weren’t.

Cuomo had used a visual of Biden in his slideshow of touchy-feely behavior, explaining it away as it being just how he is.

Biden spoke at the White House moments after House Speaker Nancy Pelosi called on Cuomo to resign – following a torrent of other Democratic party leaders.

As always, I commend the women who came forward to speak their truth. Recognizing his love of New York and the respect for the office he holds, I call upon the Governor to resign.

James released her long-awaited report into the allegations against embattled Cuomo on Tuesday morning.

It says he sexually harassed 11 women including some whose allegations were not previously known, like two state troopers and an executive assistant who says he groped her breast at the Governor’s mansion in Albany in November 2020.

James said all of the allegations are corroborated but she has not recommended any criminal charges against him, saying the scope of her work didn’t include prosecution.

There has since been an onslaught of calls for him to resign afterwards on both sides of the aisle, including from New York City Mayor Bill de Blasio who went as far as to call for him to be impeached.

Earlier reacting to the allegations, Cuomo said he is a ‘warm‘ person who sometimes ‘slips‘ and calls women who work for him ‘sweetheart and darling‘, but insisting he has never been predatory or physical in his interactions with staffers.

His attorney has also released an 85-page rebuttal to the report which she says she will continue to update.

In his televised address, Cuomo used a slideshow of images of him hugging and kissing people throughout his life to demonstrate what he described as an affectionate and tactile personality, that he says the women have confused for a sexual predator.

Watch a video of US President Joe Biden speaking below;