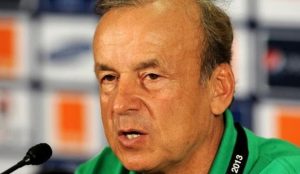 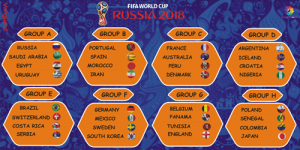 For the fifth time in six FIFA World Cup appearances, Nigeria will be playing against Argentina in the group phase come next year summer in Russia.

Rohr in his reaction to the draw said the Super Eagles will have to be up and doing if they are to make it through to the next phase.

In Russia, the Super Eagles’ first match will be against Croatia at the 35,000 –capacity Kaliningrad Stadium on Saturday, June 16, 2018.

Rohr harped on the fact that Nigeria need to start well in their first game.

“It’s the first game and if we start well we can have a chance to go through. Croatia will be the most important game because they have technical quality and play very good football. I played with Bogdan at Hadjuk Split and I know that Croatian players are quick and technically very strong. At the moment, they are one of the best teams in Europe and beat Greece 4-1 in the play-offs so we have to be prepared and ready for them”

For their second match, Nigeria will fly to Volgograd, where they take on Iceland at the 45,000 –capacity Volgograd Arena on Friday, June 22, 2018 and Rohr equally noted the importance of the game.

“They have a lot of fans who usually act as their number 12 player. I saw them play at the European Championship in 2016 and the supporters were very massive as they got all the way to the quarter-finals. Their fans will be there and it will be like they’re playing at home.” Rohr stated.

On the final group opponents, Argentina, Rohr noted that the recent victory recorded over the two-time world champions in a friendly will count for less in the World Cup proper.

“When we played and beat Argentina 4-2, they did not have Lionel Messi who’s arguably the best player in the world.” Rohr noted.

“So when we faced them at the World Cup, they’ll be stronger with him playing. On the other side, we scored four goals and he’s not going to play in defence so if we can score more goals against their defence than he will lead his team to score against us, then we will be fine.

“We showed that it was possible to win against Argentina, but it will be a different ball game and we have to be strong both mentally and physically. It will also be a difficult game for them,” Rohr concluded.

Atiku Promises To Beat Pres. Buhari In The 2019 Elections As He Has Lost His Goodwill

Couple Cracks Their 4-Month-Old Son’s Skull, Cook Him In Microwave