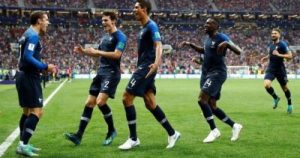 Mario Mandzukic scored an own-goal to open scoring, with referee Nestor Pitana awarding a penalty to Les Blues after a confirmation from the  the Video Assistant Referee (VAR) after 38 minutes. Antonio Griezmann converted the spot kick, sending goalkeeper Subasic the wrong way.

Paul Pogba scored the third on 59 minutes, before Kylian Mbappe found the net for France in the 65th minute

Ivan Perisic and Mario Mandzukic however got the goals for the Croatians in the 28th and 69th minute.

The final is a perfect summary of the 2018 FIFA World Cup in total, as included an own goal, a VAR decision and a penalty.